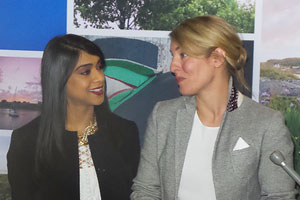 Federal tourism officials are reaching out to millennials, with tourism minister Bardish Chagger using the Rendez-vous Canada show in Montreal to announce the launch of the Millennial Travel Program yesterday (April 27, 2016).

That demographic is seen as tech-savvy, with Chagger saying millennials “are born with a smartphone in their hands.”

Millennials like to “go off the beaten path” and Chagger predicted they’ll “share and forward all the amazing things our country has to offer …We want a generation of lifetime digital ambassadors.”

Meanwhile, Destination Canada president David Goldstein told those same delegates that next year marks the 150th anniversary of Confederation and promised the country’s tourism sector will make that milestone “the most spectacular celebration on the planet.”

Chagger in turn praised her government for deciding to give Destination Canada an additional $50 million over the next two years for marketing efforts in major source markets for Canadian tourism.

In the photo, from l to r, are Canada’s minister of tourism, Bardish Chagger and heritage minister, Melanie Joly at this year’s Rendez-vous Canada in Montreal.