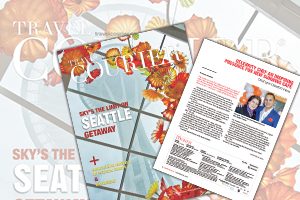 Seattle beckons with the buzz of NFL fan fever in the fall and early winter, as the Seahawks wage another football campaign, reports Western editor, Ted Davis in this week’s digital edition of Travel Courier.

Seattle’s “getaway” factor favours Canadians, who need only about three hours for the drive south from Vancouver, across the border and down the I5 freeway.

Once in the Emerald City, they can sample American-style shopping, eclectic dining, live music entertainment, the Experience Music Project, the Space Needle… and perhaps catch a Seahawks game.

A great place to hang one’s hat for such a visit is the Edgewater Hotel.

It is so named for its proximity to the calm waters of Elliott Bay (Seattle’s harbour), and its cozy interior is an inviting refuge from the fall winds and rain that usually sweep through the city.

The fireplace lounge, reading nook, dining room, bar and many of the rooms have big windows that face the bay and provide great views of Seattle’s waterfront, framed by the Olympic mountains behind.

Located at Pier 67, The Edgewater is the only over-water hotel in Seattle.

The Six Seven Restaurant & Lounge at The Edgewater is a popular place to gather, and reservations are recommended.

It combines stunning waterfront sunset views with a menu comprised of organic local produce, meat and seafood from around the Pacific Northwest.

The reading nook has a wall of photos to describe a more riotous past, when rock and roll royalty would take up residence at the Edgewater when in town for a concert.

Among the guest luminaries were The Beatles, Led Zeppelin and the Rolling Stones, to name a few.