Home › Destinations › Seven Things Not To Miss In Vilnius In 2023

Seven Things Not To Miss In Vilnius In 2023 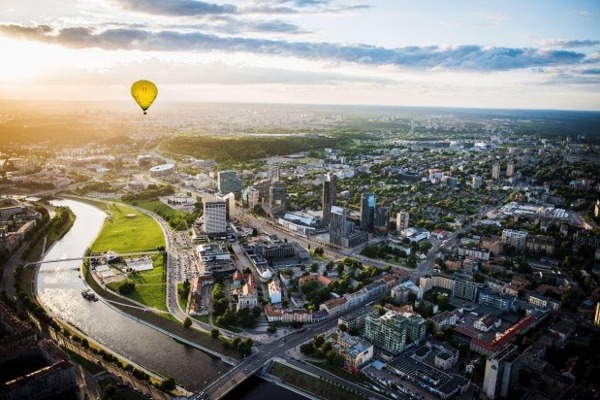 It will be a year of celebrations as Lithuania’s capital, Vilnius marks its 700th anniversary in 2023.

The city has a huge number of events and activities planned – everything from scenic hot-air balloon rides over the Old Town to an Opera resurrected from the 17th century.

Beginning Jan. 25, 2023, Vilinius’ 700th birthday is one of UNESCO’s notable anniversary dates — appropriate for a city with one of Europe’s most beautiful Old Towns and one that is recognized on the organization’s World Heritage List.

Demonstrating that the best tunes are played on the oldest fiddles, the city is organizing a wide plethora of events that offer the best of Lithuania’s past and present.

Starting with a modern blend of architecture and light installations as part of the Vilnius Light Festival to the resurrection of a 17th century opera, here are the seven biggest things not to miss in Vilnius in 2023.

1. Lighting installations change the city — The anniversary edition of the Vilnius Light Festival stands out among the multitude of events that take place in the city because it turns the Old Town and the city center into a diverse outdoor show. Contemporary light installations, new media art, and the merging of architecture and light permeate Vilnius’ streets and squares over three days, casting fresh light on the city’s rich collection of ancient structures. The festival runs from the Jan. 25 to Jan. 28.

2. A bird’s-eye-view of the festivities –– Vilnius has one very special trick to make a trip there absolutely extraordinary: hot-air balloons swarm the city’s skyline. As the only capital in Europe that permits hot-air balloon flights over the city, the hot-air balloon community has enduring customs that are followed during each flight, including a christening ceremony for first-time flyers involving champagne and a smidge of dirt. Visitors, thus, have a unique opportunity to not only witness breathtaking views but congregate with a warm and ambitious community.

3. The Baroque gem of Europe — With possibly the greatest Baroque old town in all of Eastern and Central Europe, Vilnius has been made part of the World Heritage list by UNESCO. Vilnius, after all, is a city filled with structures from the late Gothic to Classic eras, much like a textbook on architectural styles. There are very clear traces of the Baroque period throughout this, with examples such as St. John’s Church, which has an intriguing medieval bell tower, and St. Casimir’s Church, which has a dome that resembles a crown. Add to that a vibrant cultural and gastro scene, and the result is a city center pulsating with life.

4. Urban festival rocks the capital — The As Young As Vilnius international music festival will bring the city together once more on July 25, which is also the day of St. Christopher’s — Vilnius’ patron saint. To celebrate it, the festival will feature a wide range of concerts by classical, modern, pop, and other music performers in the city’s beloved Vingis Park. In 2022, it drew over 45K local and city guests, including rebellious teenagers, families with young kids and older opera-lovers. Its popularity is thanks in no small part to Scottish pop music legend Lewis Capaldi being one of the main acts. The organizers have promised to make the 2023 festival even grander and to wow the residents and the visitors with exceptional performances and visual effects shows.

5. What went on behind the Iron Curtain —  Vilnius’ newest museum is a must for modern art lovers and those interested in seeing works by modern and contemporary Lithuanian artists. Its newest exhibition Vilnius Poker — set to be open for April-December 2023 — will invite visitors to MO Modern Art museum to explore the city-labyrinth of text, sound, and images. The exhibition was created for Vilnius’ 700th anniversary and recreates the mood of the city in the 1980s, the late Soviet era, when everything appeared static and endless, but it was actually a moment before an enormous historical shift — the fall of the USSR. Locals will recognize that the exhibition shares its name and is inspired by a 1989 novel about Vilnius, Vilnius Poker, by the Lithuanian writer Ri?ardas Gavelis.

6. The quirky district surrounded by a river —  The people of Užupis, one of Vilnius’ oldest districts, made the unusual decision to ironically declare independence on April 1, 1997. The 41 provisions of its constitution — currently listed in the very heart of Užupis in a number of languages — convey humor, freedom, and tolerance. In addition to its own constitution, the Užupis Republic also has its own anthem and flag. Visitors may obtain Užupis stamps added to their passports on April 1st when they cross the district’s principal bridge.

7. Opera echoes through the streets —  Vilnius is becoming increasingly recognized as a city of Opera, with roots in the genre that stretch as far back as the 17th century. Today, there are notable Lithuanian composers that step outside of traditional opera, as showcased by the famous Sun & Sea (Marina) opera, which won a Golden Lion in 2019 and was first performed in Vilnius. Thus, on the year of the city’s anniversary, a lot of attention will be devoted not only to classical opera, but to the integration of the genre with modern technologies as part of the Opera.Connect: Vilnius, a City of Opera event. Alopera, a piece that was performed almost five centuries ago, is set to be resurrected on Sept. 2 to Sept. 3, 2023 in the Palace of the Grand Dukes of Lithuania. Furthermore, The Opera on Wheels project will give everyone the opportunity to listen to excerpts from operas in unexpected urban spaces and residential areas.