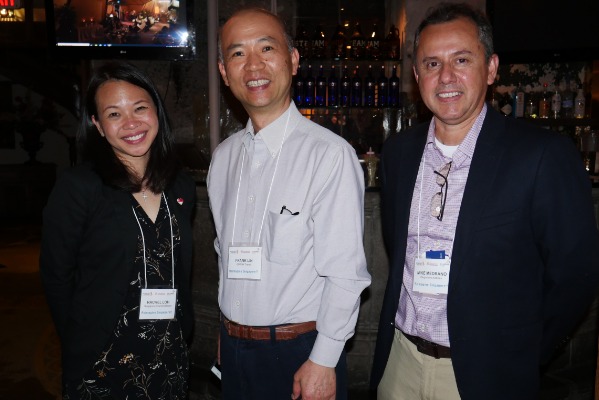 A select group of 30-plus tour operators and travel agents from the Vancouver area assembled at a downtown eatery last week to reacquaint themselves with Singapore, and with Singapore Airlines, reports Press Today’s Ted Davis.

The Singapore Tourism Board joined the airline in co-hosting the evening dinner and presentation function with a view to welcoming back travel retailers, who have been largely absent from the market over the course of the pandemic.

Singapore is now open to travellers with valid vaccination documents, so the evening’s guests were ready to hear the latest information on the destination and the airline – and they were not disappointed.

Most immediately newsworthy was the change to the schedule of flights on SIA between Vancouver and Singapore. The frequency has gone from four flights a week, with a link to Seattle, to three flights a week with no link to SEA. The flights operate using Airbus A350-900 equipment.

When they get to Singapore, travellers will have an expanding menu of activities to sample, and hotels from which to choose. One of the most notable debuts, set for the end of this year, will be the opening of a second Raffles Hotel.

The original Raffles, near the city’s central business district, is a Singapore symbol of luxury lifestyles, known worldwide. Its new sister property will be located on the nearby Sentosa Island, an historic enclave that now features themed entertainment options like Universal Studios. The new hotel will have 61 villas, each with a private pool and terrace.

Sentosa is also the site of the new SkyHelix Sentosa, the highest open-air panoramic ride in the city. Riders sit in an open-air gondola and take in views from 79 metres above sea level.

Also, noteworthy on the hotel front is news that the eye-popping Marina Bay Sands, with its SkyPark suspended on top of three hotel towers, will be adding a fourth tower. The fourth tower will sit separate from the tri-tower first hotel and will have 1,000 all-suite rooms, plus its own multi-level SkyPark and a concert arena.

Back down on the ground, Singapore visitors can choose to tour the city in style, in the new sidecar tours of the Civic District by Sidecars Singapore. It uses vintage Vespa scooters to give guests a one-hour guided tour from the unique open-air perspective of a sidecar.

Those seeking a connection to much more horsepower will be pleased to know that the Formula One race on the wide boulevards circling Marina Bay is back on again this year. The only night race on the F1 schedule will take place on Oct. 2, as part of a long weekend starting on Sept. 30.

Frank Lin of Goway Travel was the big winner of the Singapore event in Vancouver last week. He won two return economy/premium economy tickets to Singapore, plus a hotel stay.

Frank Lin of Goway Travel (centre) won Singapore Airlines tickets to Singapore plus a hotel stay. Presenting him with the prizes was Rachel Loh, senior VP Americas for the Singapore Tourism Board, and Mike Medrano, senior account executive for Singapore Airlines in California.