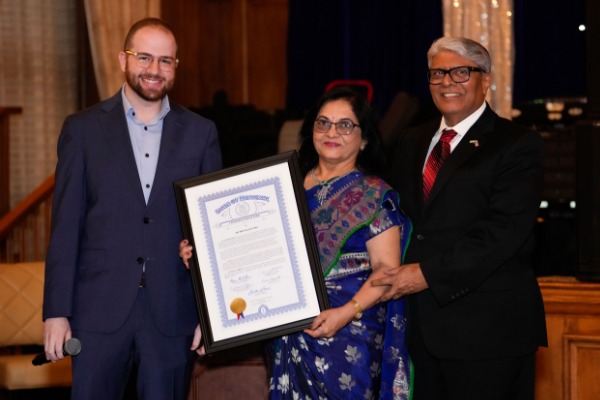 Company CEO, Arvin Shah, and his wife, Jaya Shah greeted and mingled as guests arrived at the opening cocktail reception.

The main event was kicked off by the event’s Master of Ceremonies who delighted the audience with several lighthearted jokes and 1976 nostalgia, the year Sky Bird Travel was established.

The first guest speaker introduced was longtime Shah family friend Andy Bhatia, who shared stories of how he met Arvin Shah. Although unable to attend in person, Delta Senior Vice President of Global Sales, Bob Somers, and Chief Executive Officer of Travelport, Greg Webb, congratulated Shah and Sky Bird on the success of 45 years in the industry with video tributes.

The culmination of the presentation was the introduction of Arvin Shah who was greeted by the audience with a standing ovation. Shah reminisced about building Sky Bird Travel & Tours from the ground up, the long hours of establishing partners with airlines, and how the dedication put into the company has made Sky Bird Travel what it is today.

Shah recognized Sky Bird COO Raj Patel and CFO John Burbidge, as his “right and left hands,” which helped him make the journey throughout 45 years of Sky Bird.  After many thanks to the airline partners and the Sky Bird team, Shah thanked his children Akshay and Priya, and, most importantly, his wife, Jaya Shah, who stood by his side during the early days when they started Sky Bird.

Shah finished his speech with an announcement, in honour of Sky Bird’s 45th anniversary, that the company would make a generous donation of $10,000 to Ukrainian relief efforts. Akshay Shah, Mr. Shah’s son, wrapped up the speeches with a few words of his own and a champagne toast to Sky Bird Travel’s 45th anniversary.

The presentation was followed by a sumptuous five-course dinner.  The evening concluded with a performance by the Bluewater Kings band who put on a high-energy set that had the crowd dancing to midnight.

Appreciating his team, Mr. Shah announced that all Sky Bird employees and their family members would be treated to an all-expenses-paid cruise to the Bahamas later this year.

Go to www.skybirdtravel.com for more.