Smooth Sailing Ahead For PONANT

Luxury Line Has Lots Going On For 2020 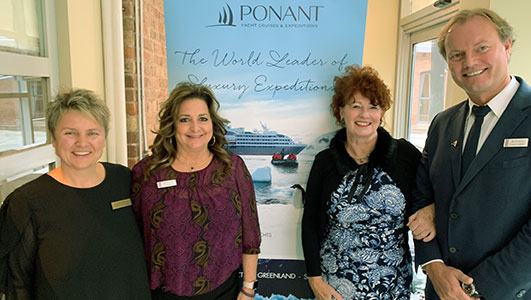 Things are looking bright for PONANT Yacht Cruises & Expeditions in 2020 with the addition of two new ships, a new partnership and 42 new itineraries through such destinations such as North America, Europe, Asia and Africa.

Officials from PONANT, the only small, luxury cruise line sailing under the French flag, dropped by Toronto yesterday (Oct. 17) as part of a five-city road show to update the trade on all that’s new at the luxury line.

PONANT currently operates a fleet of nine ships and has two new Explorer ships coming onboard next year – Le Bellot and Le Jacques Cartier. Like their sister ships, both vessels will feature the innovative Blue Eye lounge located eight feet beneath the water line, an industry-first, multi-sensory space that allows guests to experience the sub-aquatic world through sight, sound and feel.

In 2021, PONANT will launch Le Commandant Charcot, the first luxury electric hybrid ship. The vessel, which will have 135 staterooms and suites, will be able to travel through ice floe up to seven feet thick and reach the true North Pole at 90 degrees latitude.

PONANT is also celebrating a new partnership with the Musée du Louvre and will offer two new sailings in the Adriatic and Persian Gulf departing in August and November 2020, respectively. Onboard programming will be carefully designed with curators and department directors from the Louvre enabling guests to discover the ancient lands that have inspired the museum’s collections.

Frédéric Jansen, global sales ambassador for PONANT, joined the company in 2012 and told those at the Toronto luncheon that he was immediately amazed by the atmosphere aboard PONANT’s ships and with the cruise line’s dedication to its destinations.

“No ship has over 250 passengers, but it’s not just about the ships, it’s the importance of the product, the destinations,” he said. “We enjoy the moment, we go where the others don’t go.”

He noted it’s not uncommon for a ship’s captain to interrupt a lecture, or wake passengers, to let them know there’s something worth seeing.

“We live for the moment,” said Jansen. “The animals are there now… [we can do] the lecture later. The captain might say, ‘it’s going to be nice sunrise, I will wake you.’” 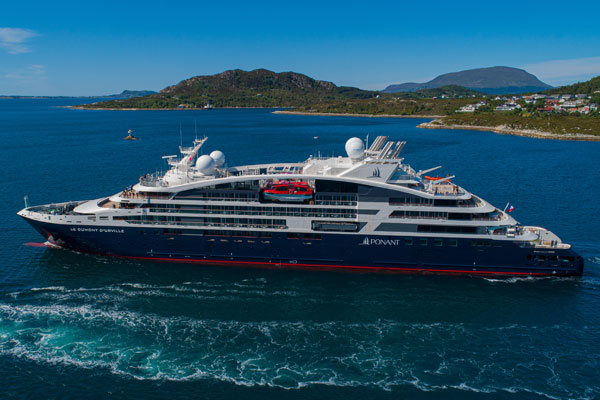 Jansen noted that while PONANT ships are more intimate than most, they still offer everything the big ships offer, except casinos.

“We have spas, a library, heated pools, dance evenings, shows, language lessons, lectures,” he said, noting, however, that “the big emphasis is always on the destination. We show you the world, and the truth behind the destinations.”

He added that PONANT itineraries are very flexible and while they operate on a Plan A, if circumstances require, there’s always a Plan B or C.

PONANT sailings, which offer a country club atmosphere, are truly all-inclusive, with Jansen noting, “that if you don’t go to the boutique or spa, your bill will be zero.”

Both English and French are spoken onboard and guests need not worry about always having to be dressed up.

“It’s a very friendly atmosphere. If you don’t want to wear a jacket and tie, no problem,” said Jansen. “If you do, that’s fine as well. It’s all about balance and flexibility.”

PONANT will have eight ships exploring Europe’s coastline next year during more than 15 new itineraries. A new nine-night, music-themed cruise is on the docket for September covering the rich cultural heritage of Northern Europe accompanied by world-class chamber musicians performing an all-Beethoven repertoire. The sailing coincides with a worldwide celebration of Beethoven’s birth. In warmer waters, new Mediterranean sailings include trips between Athens and Venice and voyages through the Aegean Sea.

And, travellers will be able to see the Seychelles like never before as Le Bougainville embarks on a selection of new expeditions in the Seychelles in winter 2020.