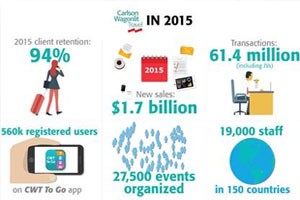 2015 was a good year for Carlson Wagonlit Travel (CWT). The company has just announced solid financial results for the year just passed, including an increase in new business sales to $1.7 billion; an increase in North American transactions by 1.1%; a 94% client retention rate; and 90% travel manager satisfaction.

Breaking it down, CWT increased its new business sales to US$1.7 billion, while its transactions were stable at 61.4 million. Overall sales volume reached US$24.2 billion, reflecting the significant curtailment in travel expenses by energy customers. Excluding the impact of the energy portfolio, transactions increased by 1.3%.

North American transactions were up by 1.1%. Transactions in Europe, Middle East and Africa declined by 1.2%, while Latin America volume was off 7.8% due to the weight of the energy sector and the economic recession in Brazil. Asia Pacific volumes were stable.

Douglas Anderson, president & CEO of CWT commented: “2015 was a challenging year for the industry overall given the continued sharp fall in energy prices and oil in particular. We nevertheless delivered solid results.”

Anderson continued: “We continued to focus on enhancing our technology offering, with the deployment of mobile hotel booking on CWT To Go and the global launch of CWT AnalytIQs, a powerful tool to report and manage travel data. Finally, we strengthened our growth platform in France with the acquisition of Ormès, a leader in Meetings and Events, and the sale of our leisure business Havas Voyages.”

Go to http://www.carlsonwagonlit.com for more, or check out this video, summarizing the results at https://www.youtube.com/watch?v=6I3JagfQzWM .