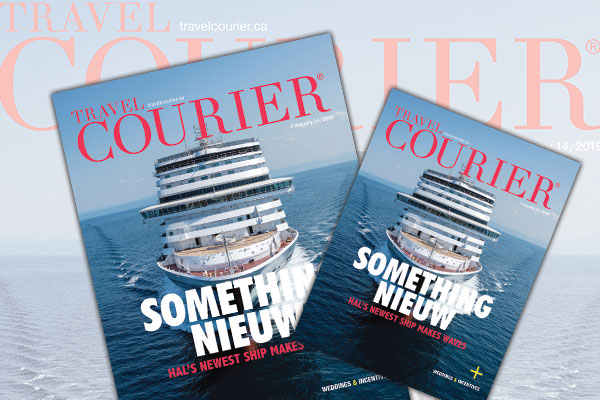 Picture this: Oprah Winfrey is donning pajamas and handing out shots of tequila as passengers taking part in Holland America Line’s Girls’ Getaway cruise go wild with excitement at the sight of the popular talk show host, film star and founder of O, The Oprah Magazine.

In this week’s Travel Courier cover story, assistant editor, Ann Ruppenstein writes that while the prominent Godmother of Nieuw Statendam, who officially named the ship earlier this month, likely won’t be cruising along with clients on upcoming trips, rest assured they will still be entertained.

“Music Walk has changed the entire dynamics of how the ship works for us. We’re essentially treating it like we have five entertainment venues,” says Bill Prince, vice president of entertainment & enrichment, noting Rolling Stone Rock Room is now also available on the Koningsdam, the first ship in the Pinnacle Class line.

And Prince continued: “Music Walk has become more of an overall concept. It’s a collection of clubs now, and various combinations of these clubs will start to appear on various ships. Some ships may only have two of them just due to space requirements or logistics… These Pinnacle-Class ships, the Koningsdam and Nieuw Statendam have four.”

“The concept has been so popular and people love it so much that we want to get as much of it as we can throughout as much of the fleet as we can so we’re working our way backwards to our older ships to add these clubs over the next couple of years,” he says.