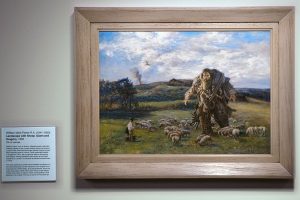 The latest element of Tourism Ireland’s 2016 Game of Thrones campaign has been revealed – and this time it involves a painting in the Ulster Museum which has been re-imagined to include mythical characters from the world of Game of Thrones.

Tourism Ireland enlisted the help of an art restorer to re-create a landscape painting hanging in the Ulster Museum. The painting – “Landscape with Sheep” by William Mark Fisher – has been “updated” and now includes a Game of Thrones giant and dragon. The new painting is on display in the Ulster Museum side-by-side with the original until September.

A short film about the newly created painting is available at
http://bit.ly/1Uznzsu.

The re-imagining of this painting is part of Tourism Ireland’s wider Game of Thrones campaign being rolled out worldwide in partnership with HBO, celebrating Northern Ireland as Game of Thrones Territory. As part of the campaign, 10 intricately carved wooden doors are popping up in locations across Northern Ireland, each one telling the story of the latest episode in season six. The doors are being unveiled each week as the series unfolds – in restaurants, pubs and other venues near filming locations across Northern Ireland.