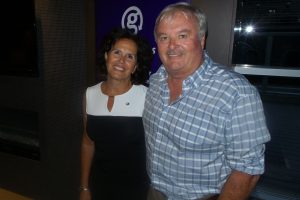 A G Adventures staffer who’s been sailing to the southernmost region of the world for some 20 years says those visiting Antarctica will find themselves in locales that have seen few changes over the past two centuries.

Scott MacPhail told a Toronto gathering last night (Aug. 9) that “man hasn’t gotten there and attacked” Antarctica, and that those who sail to the “earth’s frozen frozen frontier” will find themselves looking at what famed polar explorers “were looking at in the 1820s,” with the region free of the likes of cars and other reminders of human development.

Antarctica visitors will see icebergs that amount to “skyscrapers almost,” he added.

MacPhail’s colleague Osi Shahaf in turn said passengers can see remarkable amounts of wildlife on the cruises that sail from Ushaia, Argentina, with South Georgia Island, for instance have a fur seal population that’s “in the millions.”
Visitors will also spot penguins, which sometimes will be scurrying for food in a manner that suggests “life on Red Bull,” she joked. Whales are among other creatures that can be spotted.

Pictured at the event are Shahaf and MacPhail.