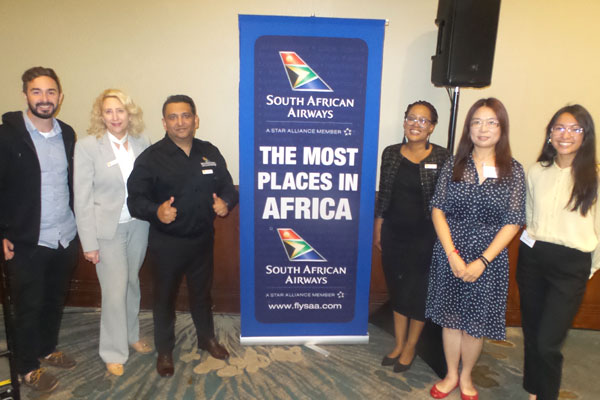 Justin Barnette is inviting people to get up close and personal with what’s arguably the most feared ocean predator.

Participants can view “our friends the sharks… that you can [safely] see from the comfort of a [submerged] cage,” he said.

And Barnette continued, shark dives are only one of many experiences available in a country that has numerous national parks, and 2,500 km of coast.

Barnette’s colleague Joshua Smith in turn noted South Africa borders six countries and praised its different cities, including Soweto, now home to bungy jumping and the Apartheid Museum, and which provides an opportunity to “learn about the footsteps of [anti-apartheid activist Nelson] Mandela.”

Mahatma Gandhi, who led India’s struggle for independence, lived for a time in the coastal South African city of Durban, and those visiting that city can learn about Gandhi’s time there on tours led by some of his relatives.

The Cape Town area in turn has a penguin colony; is home to Robben Island, where Mandela and others were imprisoned during the apartheid era and which can be visited on tours led by former inmates; and has “Marine Big 5” safaris.

Thabisile Mthethwa, representing KwaZulu-Natal, told the gathering that Zulu culture is particularly strong in that jurisdiction, and visits to Zulu communities have moved past simply “clapping and taking pictures” of cultural performances. Visitors can now walk through Zulu villages, meeting those who live there, she continued.

Much of KwaZulu-Natal is mountainous and honeymooners often like to travel by helicopter to a mountaintop, enjoying champagne there, she continued.

Meanwhile, Matthias Lemcke of the Namibia Tourism Board, said Namibia offers a very different experience than bordering South Africa does. Often deserty landscapes have watering holes certain to attract animals, which can then be spotted by tourists, he said. Wildlife includes the desert elephants of Kunene.

Namibia also has 12 ethnic groups, each with its own language, and visitors may spot people wearing their traditional dress.

Namibia, home to fewer people than Toronto, is not a mass tourism destination, and has terrain where “nothing was created by mankind,” with the sun, wind and rain having shaped the land.

“You can’t count the stars at night,” Lemcke continued of celestial displays.

Those visiting the coast may spot pelicans that Lemcke jokingly labelled the “Namibian Air Force.”

Other natural attributes include the Fish River Canyon, the second-largest canyon in the world; the Zambezi region, much wetter and more fertile than the rest of the country and which is a shelter for the likes of elephants and lions; and the Namib Desert, the oldest desert in the world.

Coastal Namibia is also home to Africa’s most northerly penguins.