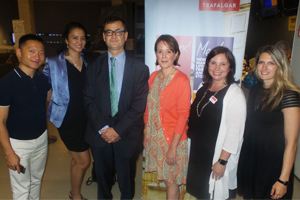 Moor(e?) power to Trafalgar and the Tourist Office of Spain…

The tour operator and the tourist board teamed up for a Wednesday night showing of the movie The Trip to Spain, featuring British funnymen Steve Coogan and Rob Brydon exploring the Iberian nation, and in doing so seeing some of the reminders of the long-ago Moorish civilization that left still-standing structures that today draw huge numbers of tourists.

And their travels provided opportunities for banter that showcased their comedic skills, with at one point the duo jokingly confusing Moor with late British actor Roger Moore, leading to one mimicking the debonair Moore’s accent.

And, said Pablo Ruiz-Jarabo, Spain’s consul-general in Toronto, the movie should further interest in a perennial tourism powerhouse.

Spain and France traditionally vie for the title of the world’s most-visited country.

Much of Spain’s tourist trade revolves around its long beach-lined coast, but Ruiz-Jarabo said the country has numerous cultural highlights and also suggested that many tourists don’t fully appreciate what the central part of the country has to offer, adding Spain has, among other things, “a beautiful countryside.”

“If they [Canadians] come to Spain they will have a very good experience,” he stated.

Meanwhile, Anita Emilio of Trafalgar said that that tour operator has a “wonderful program to Spain.”

Emilio reported that those who book a 2018 Trafalgar tour to Britain or mainland Europe now will pay 2017 prices and can also receive a 10% early payment discount.

“It’s the best time right now to book a Trafalgar vacation…,” she continued. “I can tell you the trips to Spain for Canadians are really popular.”