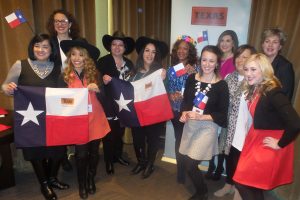 Those visiting Megan Body’s hometown can have some Grape Expectations.

Body is the spokeswoman for the Grapevine Convention and Visitors Bureau in Grapevine, Texas, and she says the city lives up to its moniker, with grapes being found there when early settlers arrived and Grapevine today having a flourishing wine scene.

Body, in Toronto this week for a Texas Tourism event, said Grapevine has 10 wine-tasting rooms open to the public and is also home to the Delaney Vineyards & Winery, found five minutes from the downtown area.

She said her city is also home to Texas’ “premier urban wine trail.” Half-day tours that visit three of the rooms and feature different wines at each can be booked.

Grapevine is also home to Grapefest, with the September festival attracting some 300,000 people and featuring more than 150 varieties of wine, she said. Lively Grapefest also features the likes of the “Champagne Cork Shootoff.”

Holly Russell of Visit Lubbock said the region around Lubbock is also home to award-winning wineries, including McPherson Cellars, with the father of the man running that winery being the “godfather of Texas wine.” His wife in turn has a winery found almost directly across the street.

McPherson Cellars has won more than 600 awards in state, American and international wine competitions and its owner is happy to speak to visitors about the making of his product.
The Lubbock area produces around 80% of Texas wine grapes, she added.

Rosalyn Hunter of VoX International, which carries the flag for Texas’ tourism trade in Canada, said Texas is now the fifth-largest wine state in the United States, home to over 180 wineries and “incredible wine trails.”

Holly fans often visit his grave in a local cemetery, sometimes leaving guitar picks on it, she added.