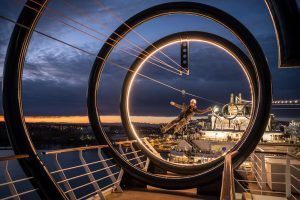 MSC Cruises has announced the line-up for the official launch and Naming Ceremony of MSC Seaside, which will be held on Dec. 21 in Miami.

As part of the traditional Naming Ceremony that is held for every new ship, MSC will welcome special guests and entertainment, Miami authorities, global media and key partners from across the travel industry.

Headlining entertainment for the event will be international superstar, Ricky Martin, who will perform some of his most popular hits. Also taking to the stage will be world-famous tenor, Andrea Bocelli.

Making a guest appearance at the event will be Miami football legend and Hall of Fame quarterback, Dan Marino, who played for the Miami Dolphins for 17 years. MSC Cruises signed a partnership with the Dolphins in October, becoming the official cruise line for the team and further strengthening its relationship with the South Florida community. Fans and guests will have the chance to experience the Miami Dolphins at sea and meet team alumni on a themed cruise aboard MSC Seaside in 2018.

In charge of it all will be actor and American TV host, Mario Lopez, who will serve as the Master of Ceremonies for the evening.

An MSC Cruises’ Naming Ceremony would not be complete without the ship’s Godmother, Sophia Loren, who will christen the ship with a ribbon-cutting and officially name the vessel, MSC Seaside.