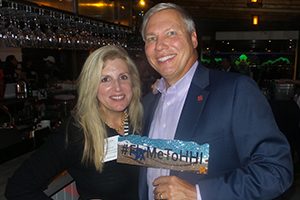 The destination was developed as vacation retreat in the 1950s, “planned as a perfect blend of resorts and nature,” Charlie Clark, spokeswoman for the Hilton Head Island Chamber of Commerce, said during a Thursday Toronto visit.

Buildings are limited to five storeys on the five-by-12-mile island that’s linked to mainland South Carolina by a bridge and is free of neon and streetlights, reducing the amount of artificial light at night, ensuring impressive celestial displays after sundown, Clark said. “It’s almost like a Milky Way effect.”

Hilton Head Island expects to make further inroads in the Ontario market following Air Canada’s decision to begin linking Toronto with Savannah Hilton Head International Airport May 1, which is some 45 minutes from Hilton Head Island. The daily service is slated to run through Oct. 15 at least.

Clark added the island is home to deer and some 200 bird species, including such seabirds as great herons. “For your birdwatchers, it’s really bird heaven.”

Clark added dolphins are common off Hilton Head Island’s shores. “In 16 years I’ve never been out on a boat or kayak without seeing dolphins.”

Hilton Head Island Chamber of Commerce president Bill Miles in turn said that the destination is home to 24 golf courses, about 20 of them open to the public. Each April sees the destination host the PGA RBC Heritage tournament, with the Harbour Town Golf Links being the host course.

Visiting golfers who opt for Harbour Town Golf Links are able to “play where the pros play,” he continued.

Among lodging options is the Sea Pines Resort, a high-end resort found on 5,000 oceanfront acres.

Other hotel options include ones belonging to the Omni, Westin, Marriott and Sonesta brands.

Clark in turn praised the nearby town of Bluffton as a “very up-and-coming” community that’s “kind of funky” and has “amazing creativity.”

Seen here at the Toronto event are Clark and Miles.