US Won't Abandon Canada In The Face Of Sagging Loonie 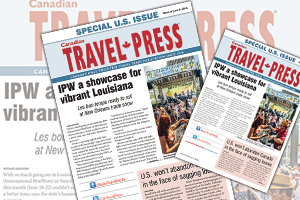 Brand USA will not be curtailing its efforts in the Canadian market even though the lacklustre loonie continues to put a major dent in southbound numbers.

That was the encouraging pledge from CEO Chris Thompson during the run-up to this year’s IPW trade show in New Orleans, reports Montreal editor Mike Dunbar in this week’s digital edition of Canadian Travel Press.

While Thompson acknowledged that America’s tourism marketing agency is facing north-of-the-border challenges fueled by the exchange rate gap, he stated frankly, “It would not be in our interests to abandon Canada. After all, it’s a market that still brings in 20 million overnight visitors a year.”

And he pointed out, “Canada will be playing a major role in helping us meet our 2021 target of 100 million visitors a year by providing one-fifth of that total.”

The way the numbers are trending, Canada will only meet the one-fifth goal if there’s a major currency rebound in the next four years. That’s because it’s now looking as if the total will drop below 20 million this year.

In 2013, the number of southbound overnighters reached 23.4 million. By last year, it had dropped to 20.7 million and the first quarter of 2016 showed an accelerating decline.

Mark Brown, a senior economist with the US Department of Commerce explained, “Canada volume of one-plus nights to the US was down 13.4% in March; eerily marking the third consecutive decline of 13.3% or 13.4% and the sixth consecutive month having a decline of 13% or more.”