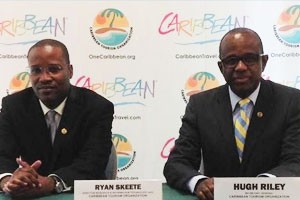 Tourism officials in the Caribbean are celebrating these days following the release of 2015 arrival and spending results by the Caribbean Tourism Organization (CTO).

The results show that the Caribbean outperformed every major tourism region in the world in 2015, with international tourist trips to the region growing by 7% to 28.7 million visits – much higher than the projected 4% to 5% growth – and visitor spending hitting an estimated $30 billion – a 4.2% jump over the $28.8 billion spent in 2014.

In announcing the results, Hugh Riley, secretary general of the CTO, ‘s secretary general, said: “2015 was the second year in a row that the region has done better than the rest of the world, and the sixth consecutive year of growth for the Caribbean.”

Riley attributed the growth to improved global economic conditions in the marketplace; a boost in consumer confidence, particularly in the United States; falling oil prices; rising seat capacity and persistent marketing by CTO member countries and their partners.

The CTO reported growth in all the major markets – the United States, Canada, Europe, the Caribbean and South America – with the intra-regional market performing better than it has ever done before.
Said Riley: “Despite concerns about the cost of travel within the region, intra-Caribbean travel recorded its best performance since we started keeping records. In 2015, traffic from the Caribbean market accounted for 6% of total arrivals into the region, with 1.7 million visits among the various states, an increase of 11.4% over the previous year.”

The US, which remains the Caribbean’s primary market, accounting for about 50% of arrivals, grew an impressive 6.3% to 14.3 million visits.

Of the 5.2 million European visited, 1.1 million came from the United Kingdom, which recorded a 10.4% rise.

And those results led Riley to observe: “Needless to say, we are very pleased with the Caribbean’s performance of stay-over arrivals in 2015. In each quarter the region recorded at least 6% growth over the corresponding quarter for 2014; and each month in 2015 was better than the same month the previous year.”

However Riley also cautioned: “Still, the Caribbean cannot be complacent. We must continue to grow our traditional markets, strengthen emerging ones and penetrate new sources as we target the 30 million arrivals mark we set some years ago. Our efforts to improve our product quality, enhance our marketing, grow our rate base, increase our profitability, and constantly offer excellent value for money, must continue.”

As for 2016, the CTO’s secretary general indicated that the outlook was positive, with tourist arrivals expected to increase by 4.5% to 5.5%, while cruise is estimated to record one to two per cent growth, as summer redeployment of ships continues.

Seen in the photo, from l to r, are CTO acting director of research, Ryan Skeete and CTO secretary general, Hugh Riley.