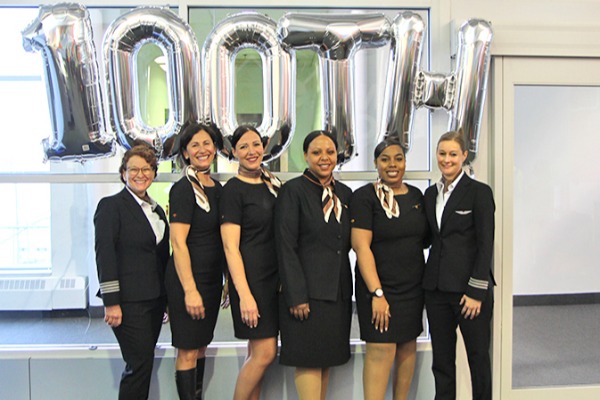 Sunwing is gearing up to celebrate International Women’s Day (March 8, 2020.) The carrier operated its 100th flight crewed entirely by women on March 2.

The flight was piloted by Captain Vicky Marks from Sunwing’s Quebec City base, assisted by First Officer Nicola Godfrey from Sunwing’s Toronto base. The cabin crew was led by Cabin Safety Manager Tiziana Di Giuliantonio and included three female flight attendants Zoi Loukas, Anita Tasha Thompson and Camille Osbourne. The customer journey for flight WG 438 was handled by women every step of the way. From sales and reservations agents to flights ops dispatch, maintenance, ramp agents and in-destination support services, Sunwing employs thousands of women who are part of a customer’s vacation journey.

Yesterday (March 2) also marked the start of Women of Aviation week which aims to address the gender imbalance in the aviation industry. Sunwing’s 100th all-female-operated flight also marks their commitment to this cause and celebration of their female aviation professionals.

Captain Vicky Marks, who piloted the flight, commented on the occasion, “It’s such an honour to be part of the 100th all-female-operated flight by Sunwing. It wasn’t long ago that women were limited to very few roles in the aviation industry; however, today, women are involved in every part of the industry. I’m proud to be a female pilot, and I hope this monumental flight and the increased opportunities for women in this field, inspires more women to pursue careers in the aviation industry.”

Vice President of Flight Operations for Sunwing Airlines, Piyush Gandhi, stressed the importance of this initiative. “As the Chair of Sunwing’s diversity and inclusion committee, Y.A.Y! (You Are You!), I am so proud to work for an organization that celebrates and empowers women. The aviation industry has been a traditionally male-dominated field, so it’s great to be a part of a company that celebrates women and makes all-female flight crews a regular occurrence as opposed to a rare one. The women at Sunwing are breaking down barriers and taking on the world of aviation in a variety of roles. In the last five years the number of female pilots at Sunwing increased by 160%– and while that number is a great accomplishment, we’re hoping this trend only continues to grow in the future across all areas.”