Home › Airlines › Sunwing Renews Cadet Program At U of W

Sunwing Renews Cadet Program At U of W 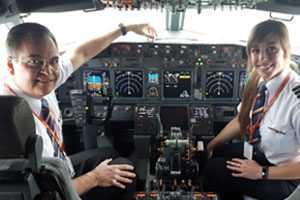 Sunwing Airlines has announced that it’s renewing its cadet program with the University of Waterloo. Established last year, the degree program resulted in the successful hire of four graduates as First Officers by Sunwing Airlines in July 2016.

The news was shared last week by Captain John Hudson, Manager of Standards for Sunwing Airlines, during an event at the Region of Waterloo International Airport to mark the first commercial flight operated by one of the recently-hired cadets, First Officer Chelsea Anne Edwards, under the supervision of Captain Hudson; flight number Sunwing flight WG422 from Sudbury to Kitchener-Waterloo.

Conceived in partnership with the University of Waterloo – an academic institution known for its “hands on” learning in cooperation with industries — just under a third of the degree requirements are focused on the aviation component which is delivered by Waterloo Wellington Flight Centre.

Graduates complete their degrees with strong academic qualifications in addition to flight skills. The workload of the university courses undertaken and the flight training is equivalent to a double major.

“Attracting high-calibre graduates to join our flight team is essential to our growth and success as an airline. We were extremely pleased with the performance of the cadets that graduated from the program this summer and hired four of them as First Officers upon completion of their studies. We expect to be able to hire similar number of graduates next year.”

Once licensed to fly the 737-800 aircraft, the graduates follow Sunwing Airlines’ continuous program of line indoctrination for approximately 200 flying hours and also receive mentoring to ensure that they achieve their career goals.

During the 2016/2017 academic year, the airline also partnered with Seneca College on a similar program and was able to hire two cadets as a result of the partnership; which will also be renewed for the coming academic year.

The Sunwing cadet program will recommence in July 2017.