A Sea Change For Taiwan Tourism 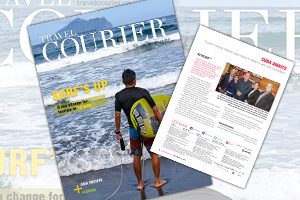 For many travellers, Taiwan is largely defined by the retail/culinary attractions of the capital city Taipei, with its busy, cosmopolitan environs.

And while that outlook is entirely valid, it fails to encompass the many other cultural and nature-borne aspects of this island at the top of the South China Sea, reports western editor, Ted Davis in this week’s digital edition of Travel Courier.

Taiwan tourism authorities are increasingly emphasizing the charms of Taiwan outside the city limits of Taipei, and many tour options are available that demonstrate that.

Near to Taipei, for example, is the popular village of Jiufen, which offers easy transport convenience from Taipei.

The roughly 60-minute drive takes place on a multi-lane highway that narrows down to two lanes as the road rises and curves around the bulk of Keelung mountain.

Then, around a bend, are the first glimpses of Jiufen, which clings to the hillsides in a precarious jumble of buildings.

The more vertical orientation of the town defines its most popular attraction, which is the Jiufen Old Street.

This narrow covered laneway is surfaced with stone and bordered with tiny, enticing shops selling antiques, curios, souvenirs and fragrant snacks, all crowded together on both sides.

The Old Street twists and turns as it trickles down the hillside, and can keep visitors busy for hours with its myriad products and treats.

It ultimately spills out from under the roof, and onto a steep, descending stairway that ends at the parking lots below.

But before leaving, a few well-positioned hillside cafes and restaurants lure visitors with the promise of an outside table with great views of the mountainous countryside.

Stop at the Ah Mei tea house for a tea that is especially prepared according to traditional methods, plus pastry bites to cure hunger pangs.