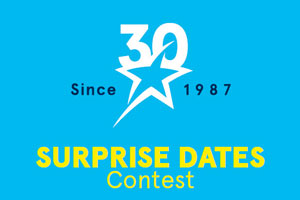 As part of the festivities for its 30th anniversary, Transat has announced the May winners of its Surprise Dates Contest.

The May winners are:

Each has won a package for two that includes Air Transat flights in Economy class and a one-week, all-inclusive stay at Excellence Resorts.

As well, $30 in Bonbon rewards were awarded to the following agents after a random draw among all participants: Ida Filippelli of Total Advantage Travel & Tours Inc. in Toronto, Ontario and Karen Withers of Maritime Travel in Dartmouth, Nova Scotia (Ontario-Atlantic), Liz Bergin of Ama Travel in St. Albert, Alberta and Laurie Costello of Tier One Travel in Calgary, Alberta (Western Canada) and Danielle Cliche of Club Voyages Fascination in Sainte-Marie-de-Beauce, Quebec and Veronique Thouin of Club Voyages Repentigny, Quebec (Quebec and greater Ottawa region).

On May 17, 2012, Transat unveiled its new, innovatively designed cabin interior to mark its 25th anniversary.