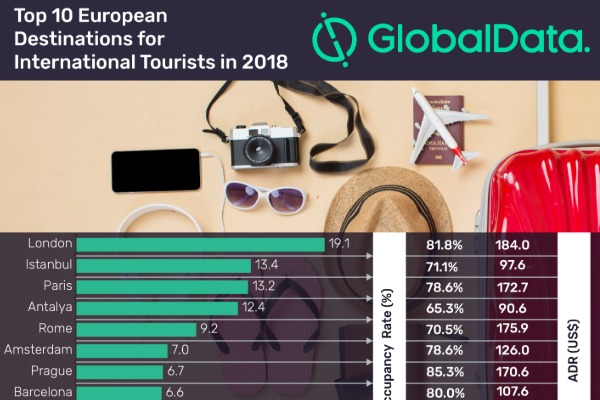 The European tourism sector continues to register growth in the number of international tourist arrivals largely due to the presence of plenty of business and leisure opportunities. However, the looming ‘no deal’ Brexit and a sluggish global economy cannot be discounted and the real opportunity lies in involving all stakeholders to develop sustainable and inclusive tourism, GlobalData says.

According to the United Nations World Tourism Organization (UNWTO), the number of international tourist arrivals in Europe reached 713 million in 2018, a 6% increase over 2017.

Aditi Dutta Chowdhury, economic research analyst at GlobalData, commented, “Enhanced air connectivity within Europe and between the regions at lower cost offered by budget carriers such as easyJet and Ryanair, and key long-haul markets are facilitating the diversification of source markets. However, imminent risks such as Brexit, sluggish global economy, protectionist policies, trade tension and geopolitical tensions are likely to hamper consumer confidence and in turn tourism growth in Europe.”

GlobalData revealed that apart from two major cities London and Paris, the top 10 destinations in Europe region are either having coastal lines or rich in culture and history.

More than 50% overnight tourists visited Paris from around the globe thanks to the cultural and business events hosted round the year.

Turkey, a fascinating melting pot where eastern and western cultures come together, was represented by two cities in the top 10 list. Istanbul, a transcontinental city located partly in Europe and Asia with a unique natural beauty, and Antalya, a Mediterranean resort city famous for adventure sports, are ranked second and fourth, respectively, in the list of top 10 European destinations.

According to the World Travel and Tourism Council (WTTC) estimates, travel and tourism accounted for 9.7% of the Europe’s overall GDP in 2018. Rapid advancements in information technology, and easy and cheaper transportation and accommodation are the major contributing factors for the tourism sector growth in Europe.

Aditi added, “Despite being large employment generator, the tourism sector growth can potentially put risk for the popular destinations in terms of sustainability. Strategic efforts and adoption of right policy at local government level can draw a balance between growing tourism and quality of life of the people living in popular tourism destinations.”

The European cities are resisting day tourism as it will add a huge burden in terms of crowded roads, spiking conveyance fee and wastage.

Venice introduced an “entry fee” of 10 euro in September for its day trippers. Cities such Vienna, Amsterdam and Rome are taking multiple actions such as imposing tourist taxes, issuing fine for bad behaviour, loitering, littering to encourage the tourists to respect the local culture.

Aditi concluded, “A committed participation of all stakeholders is required to curb over-tourism and create a conducive environment for sustainable tourism.”

For more, go to www.globaldata.com.