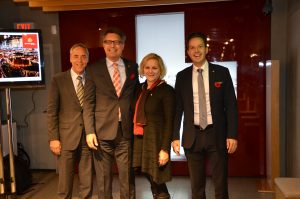 A mere two days into his post as the new director Canada for Switzerland Tourism, Pascal Prinz used the words of hockey great Wayne Gretzky to showcase his dedication to the country.

“You miss 100% of the shots that you never take,” he said, addressing those gathered in Toronto last night (Nov. 7) for his welcome reception. “And I’m going to promise you one thing — I’m going to give Canada my best shot.”

No stranger to the North American market, Prinz was previously based in New York as the trade manager East Coast at Switzerland Tourism, and takes on the role from Evelyn Lafone, who was appointed district manager Southern Germany for Switzerland Tourism in Stuttgart, Germany earlier this year.

“Canada has a special place in my heart, it’s the first country I’ve visited outside of Europe. It’s also the first country where I tried to learn English and I hope I’m doing okay, that was in the beautiful city of Vancouver some 20 years ago,” he says. “I’ve been here to the great city of Toronto to support my wonderful colleague Evelyn who has done a fantastic job and I also always enjoy visiting the beautiful area of Quebec, Montreal, very charming, so you can feel it, I’m already a bit Canadian.”

Growing up in the Swiss Alps in a small town called Chur near St. Moritz, he says an important lesson learned from his father and grandfather was that food tastes better in good company. As for his personal top five ingredients for a trip to Switzerland, he recommends: 1) visiting one of the boutique towns, such as Geneva and Basel; 2) taking in the Swiss Alps 3) going on a lake cruise 4) embarking on a scenic train ride; and 5) combining at least two language regions during a visit, his “hands-down favourite.”

Prinz told PressToday the trade will continue to play an important role in growing arrivals to Switzerland. Compared to the same period in 2016, May to September saw a 14% increase in Canadian arrivals, and an 11.8% increase in overnights.

“The travel trade community is very important, therefore we relaunched our brand new Switzerland Travel Academy,” he tells PressToday. “It’s very simple. You can become a Switzerland travel expert in only three hours and we keep it fun. It’s short and sweet and what I particularly like is an agent you can specialize in the modules you are interested in or where you have most business. If you have luxury clients you take the luxury module, if you have people who enjoy biking then you take the outdoor module.”