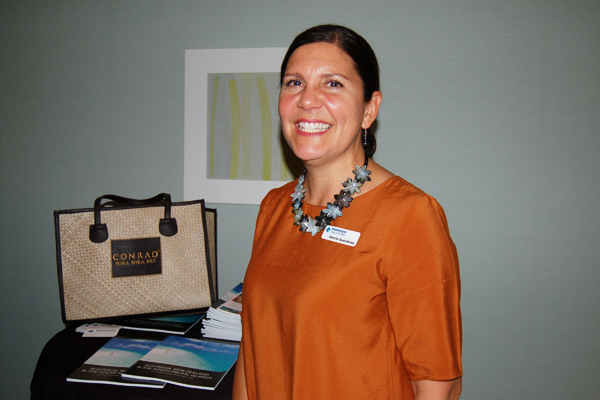 The island nation of Tahiti was centre stage at the recent Islands of Tahiti 2019 reception in Vancouver, partially through the words of two freelance travel journalists who attended as presenters. Daniel Wood and Sandra Thomas were keynote speakers at the third annual evening dinner event, which was held at the venerable Vancouver Club.

They kept a small gathering of travel professionals engaged with their experiences of travel in Tahiti, transporting them to the South Pacific with accompanying photos, despite some glitches with the audio visual tech at the club. Wood, for instance, focused on the strong element of culture in Tahiti, saying that Tahiti is a place full of stories. It’s also full of ancient temple ruins, said Wood, who also recognized the art of Paul Gauguin for communicating the “myth and magic” of the islands.

Those qualities can also be found within the new promotional campaign by Tahiti Tourisme, called Pick Your Paradise. The website home page  (https://tahititourisme.com/en-us/pyp/) presents three types of visitor experience options, including Go Far – Explore Adventure; Go Deep – Explore Culture; and Go Together – Explore With Loved Ones. There are 118 islands and five archipelagos in French Polynesia.

One of the newsy announcements was that in 2020, Princess Cruises would return to French Polynesia with the intimate Pacific Princess, offering a series of roundtrip cruises for the first time since 2015, with Papeete on the capital island of Tahiti as the home port. Cabins for booking are now available.

Another key announcement was that a new interisland ferry called the Aramiti has gone into service on the popular route between Tahiti/Papeete and Moorea. The sailing time between the two points has been greatly slashed, down to 20 minutes.

Darcie Guarderas, director of business development for Anderson Vacations, spoke at the event, and she described ways in which to make a vacation to Tahiti more affordable.

She noted that some visitors assume that the popular overwater bungalows of Tahiti must be booked for the entirety of their vacation, but this isn’t necessarily true.

Guarderas suggests instead that guests book a resort’s lush garden accommodations on one island (eg. Moorea), before experiencing a pension or guest house on another island (eg. Raiatea or Taha’a), and then book an overwater bungalow in Bora Bora for the final few nights of a vacation “as the cherry on top at the end of their stay. This is more affordable and still allows them to get those iconic photos,” she said.

Darcie Guarderas, director of business development for Anderson Vacations, spoke at the Islands of Tahiti 2019 event in Vancouver recently.