Tahiti Welcomes The World At TTE 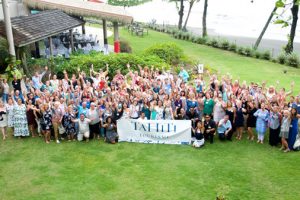 Some 30 suppliers – including the likes of Air Tahiti Nui, Sofitel Hotels and Paul Gauguin Cruises – were on hand for the Exchange, and moved from table to table offering agents nine minute presentations on their products and services. And it was certainly a popular format with the agents that we travelled with on our FAM trip.

Before the roundtable presentations began, Dave Mackay, business development manager of Pearl Resorts of Tahiti welcomed the group to the Tahiti Pearl Island Resort. Tahiti Pearl resorts are owned by local investors and provide their guests with a uniquely Polynesian exeperience.

Paul Sloan, CEO of Tahiti Tourisme, reminded TTE attendees that tourism was Tahiti’s number one industry and that their hard work selling Tahiti experiences to their clients supported thousands of families throughout the archipelagos of Tahiti.

Nicole Bouteau, Tahiti’s minister of tourism, fired up the crowd with news of the exciting development of Taputapuatea marae – a sacred site on the island of Raiatea – becoming a UNESCO World Heritage site earlier this year.

Bouteau then went on to announce an effort to increase and develop new routes from San Francisco, Australia and South America.

The minister of tourism also mentioned that the national carrier, Air Tahiti Nui is updating its fleet with new Boeing Dreamliner’s and improvements to the Papeete’s airport.

The TTE concluded with a cocktail reception and dinner with a fantastic medley of Tahitian dancing, which towards the end of the show, brought up a brave contingent of TTE attendees.