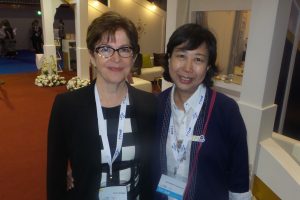 A familiar face will be on hand when the Tourist Authority of Thailand (TAT) opens its first Canadian office this fall.

The TAT announced earlier this year that it plans to open the office in downtown Toronto in September or October. Kayla Shubert (pictured on the left), who’s been carrying the flag for the TAT in Canada for 16 years, has been working from her home.

It wasn’t immediately clear when the tourist authority announced the upcoming move what role – if any – Shubert would have in the upcoming office. But authorities at this year’s Thailand Travel Mart Plus 2017 in Chiang Mai said Thursday that the office will have a director and assistant director, while Shubert will be take on the role of national marketing manager for Canada.

“I’m very pleased to continue with the Tourist Authority of Thailand in helping to promote such a wonderful destination,” Shubert told PressToday.

The decision was welcomed by Vivek Khanna of Tourcan Vacations, who told PressToday that Shubert’s been an asset for the TAT.

“I’m glad the TAT’s opening an ofice in Canada. I think it will bring more exposure for Thailand,” he continued, adding Tourcan’s been sending people to the country for 30 years.

Pictured at the travel mart are Shubert (l) and Kulpramote Wannalert of the tourism authority’s head office.