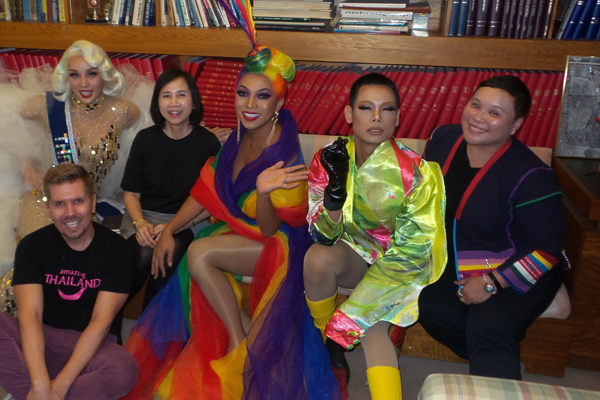 The Tourism Authority of Thailand takes great Pride in Thailand’s happily welcoming members of the LGBT community who wish to vacation in the Asian nation.

The tourism authority’s Canadian office brought members of Thai on-line TV show Drag Race – which features transgender and other performers – to Baxter Media’s Toronto office Friday as part of a promotion to get the message out that Thailand is happy to host LGBT travellers.

“Thailand is most accepting.” said the tourism authority’s Canadian director Puangpen Klanwari. “We want to show that Thailand is a LGBT-friendly destination and encourage more Canadians to see Thailand.”

“We believe in equality,” added her colleague Viktor Spysak. “There is no such thing as transphobia or homophobia [in Thailand]. People are very open-minded.”

Prakaipruek Damrongvadha of the tourism authority’s head office in Bangkok suggests Thai acceptance of LGBT lifestyles is rooted in the country’s Buddhist culture.

The tourism authority brought the three Drag Race stars – one a Marilyn Monroe lookalike – to Toronto to participate in the city’s Gay Pride celebrations this past weekend. The colorfully dressed trio posed for pictures in front of the Baxter Media building, catching the attention of passer-bys who wanted to have their pictures taken with them, including one who recognized them from his own trip to Thailand.

Spysak said the LGBT community’s appreciation of Thailand goes beyond the mere acceptance Thais have for their lifestyles, adding opportunities for romance and renowned Thai nightlife also help attract visitors. Nightlife includes shows at Tiffany’s, found in the seaside resort community of Pattaya and billed as the oldest transgender show in Asia.