After Party Double the Fun with Irish Entertainment and Raptors Victory 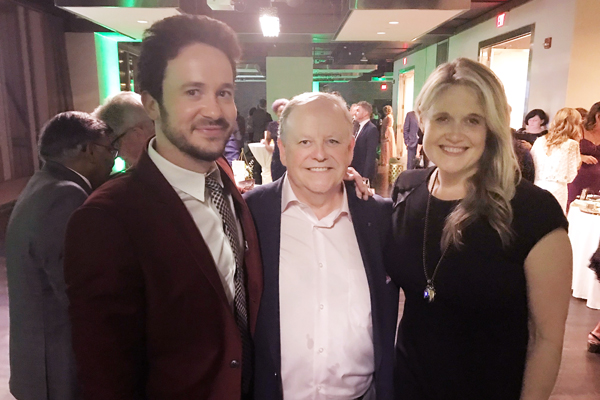 From the basketball court to the Arcadian Court, the Agents’ Choice 2019 Awards Gala ended on a high note as the O’Deadlys hit the stage and the Toronto Raptors clinched the NBA championship.

Presented by Tourism Ireland and Royal Irish Tours, the after party featured a taste of the Emerald Isle with Irish oyster shucking, Irish whiskey tasting, Irish cheese, champion Irish dancers and Irish music, marking the 20th anniversary of the Agents’ Choice Awards. There were also multiple screens with a live-stream of the Raptors game so #WeTheNorth fans didn’t miss the court-side action.

“Congratulations to the team at Baxter Media for creating such a strong program and celebrating 20 years. When we connected on the Emerald theme it was such a perfect opportunity to work together,” says Dana Welch, manager Canada for Tourism Ireland. “It was such a lovely evening connecting with colleagues and celebrating industry success stories. Including, of course, the celebration of the Raptors’ win – a night folks won’t soon forget.”

Last night was so memorable thanks to the Irish touches, like oyster sucking and Irish dancing! #agentschoice pic.twitter.com/e98V0J2kbV

Jonathan Sargeant, sales manager for Royal Irish Tours, who was joined by president Ian Duffy and vice president Conor Duffy, told PressToday the goal of the after party was to showcase a bit of Irish culture, music, and dance.

“We’re delighted to be a partner of Baxter over the years and what better way to finish off the 20th anniversary of the awards than with a good Irish party and of course with the Raptors, it’s a great celebration,” he said.

Jenni Berg, Business Development Executive at Contiki, said she attended the gala to support her teammates but wound up making new friends during the after party.

“I’m so happy to support Baxter Media in general because they’re such great supporters of the students of the future through the BSAP program and also travel agents, but I found myself in a corner with a couple of people I never knew and we had a huge screen drawn over the windows of downtown Toronto, old city hall, to see the Raptors win. We held hands together, jumped up and down and totally bonded, just like when you travel.”

Rod Hanna, director of sales – Canada for the Saint Lucia Tourism Authority, added, “thank you so much for a great evening. This after party is very unique. It’s been an amazing night with a lot of suppliers. You’ve gone above and beyond, and I’m really happy to be here.”

Oh what a night! Impressive Irish tunes and a Raptors win! #agentschoice pic.twitter.com/zqdH4SIZpK