The Art of Rocky Mountaineer 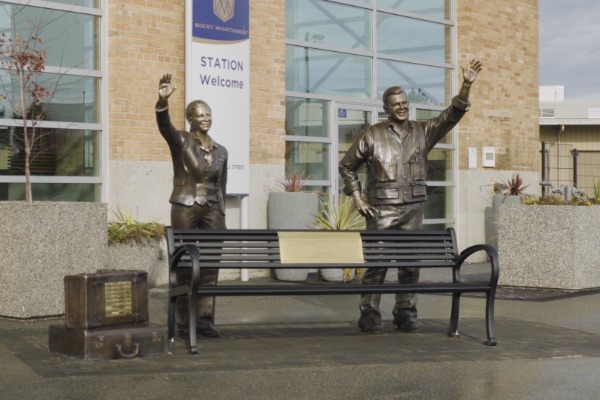 Rocky Mountaineer unveiled a bronze sculpture at its Vancouver home station to honour its employees recently. The new sculpture depicts two Rocky Mountaineer team members — an on-board host and a train operations co-ordinator — waving the train off for a departure. The sculpture is a tribute to this longtime tradition by the rail operator.

The Armstrong family, which owns and operates Rocky Mountaineer, commissioned the sculpture to show gratitude for employees who have been instrumental in the company’s success over the past three decades. The company celebrates its 30th anniversary in 2020.

At the feet of the figures are suitcases engraved with names of employees who have 20 years or more at the company, along with space to add additional names as more team members reach the milestone.

“We’re thrilled to present this sculpture to demonstrate how grateful we are for our team members who make the Rocky Mountaineer experience so special,” said Peter Armstrong, founder and owner of Rocky Mountaineer.

The new rail cars seat 72 guests and have a number of GoldLeaf luxury features. These include dome windows that can be dimmed to a moderate intensity of incoming sunlight and redesigned galleys to heighten the GoldLeaf culinary offerings, plus other features to enhance the guest experience.

Rocky Mountaineer has doubled its rail car capacity over the past six years with the addition of the 10 GoldLeaf cars, plus 12 of the slightly downscale SilverLeaf rail cars.

Go to www.rockymountaineer.com for more.