Home › Airlines › The Fight Is On For Passenger Rights

The Fight Is On For Passenger Rights 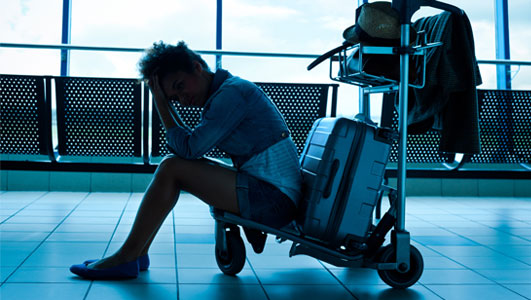 The fight is on for passenger rights in Canada.

A letter-writing campaign initiated two weeks ago has already generated tens of thousands of e-mails to senators from thousands of Canadians who want the Senate to amend the government’s proposed transportation bill.

The grassroots campaign initiated on Bill-C49.ca by Air Passenger Rights, a volunteer advocacy group, expresses concern about the fact that the proposed bill dramatically reduces existing rights for airline passengers in Canada.

The proposed bill, currently before the Senate, would roll back many of the protections Canadians currently enjoy when travelling by air and provides no new accountability for airlines. At issue for many Canadian travellers is the provision in the proposed legislation that would double the time passengers are allowed to be stranded on the tarmac without water or food from the current 90 minutes to three hours.

“The government portrayed this legislation as an ‘Air Passengers Bill of Rights,’” said Dr. Gábor Lukács, founder and co-ordinator of Air Passenger Rights. “In fact, this bill would remove or reduce many of the rights we currently have while providing no new requirements of airlines or compensation for passengers.”

Another troubling component of the bill, says the organization, is the cancellation of the current requirement of airlines to compensate passengers for flight delays and cancellations due to mechanical failures. Transport Minister Marc Garneau recently stated that this change is to help make the airlines “more competitive.”

“In Europe, airlines are required to provide specific compensation for delays and cancellations due to mechanical issues,” said Dr. Lukács. “And yet, they have a healthy competitive market and profitable airlines. This bill does not just fail to stipulate compensation, it actually makes it worse for passengers than our current system.”

Dr. Lukács will be testifying before the Standing Senate Committee on Transport and Communications on March 20 to urge the Senate to listen to the thousands of Canadians who would like them to make amendments to the proposed bill.