Home › Destinations › The Forecast Is Sunny

The Forecast Is Sunny 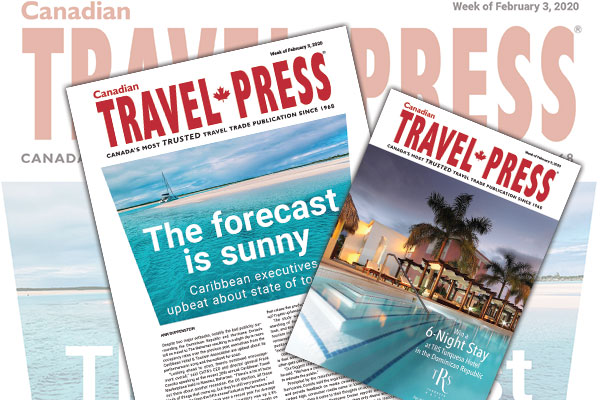 Despite two major setbacks, notably the bad publicity surrounding the Dominican Republic and Hurricane Dorian’s toll on travel to The Bahamas resulting in a slight dip in room occupancy rates over the previous year, executives from the Caribbean Hotel and Tourism Association are upbeat about its performance in 2019 and the outlook for 2020, writes assistant editor, Ann Ruppenstein in this week’s issue of Canadian Travel Press.

“Looking ahead to 2020 there’s continued encouragement overall,” said CHTA’s CEO and director general Frank Comito speaking at the recent 38th annual Caribbean Travel Marketplace held in Nassau, Bahamas. “There’s a lot of buzz out there about another recession, the US election, all those kinds of things that come up but they’re still very positive.”

Initial results from the fifth annual Industry Performance and Outlook Study found that 2019 was a record year for Average Daily Rate with a 5.6% increase, room inventory was up 2.8% to 259,538 rooms with a total of 4,451 new rooms brought on stream and air arrivals for the region were up 4.4%, which is on pace with the global average.

“What’s really encouraging and continues to be encouraging for us is the capital expenditures — upgrades, improvements, refreshing the properties and so on. As our economy has been strong, our hotels and hoteliers for the 9th consecutive year have increased their investments in capital expenditures and that’s so important because that raises the product,” he said. “How does the ADR get up? It gets up because you are offering a better product.”

The study was undertaken to gain a better understanding of the state of the tourism economy, its outlook, and the degree to which several factors impact the tourism industry. For the most part the outlook for 2020 remained strong with 20% of members being “extremely positive,” 28% “positive” 35% “fair” 15% negative and 0% “extremely negative.”

One of the biggest challenges continuing to face the region is that when a disaster strikes in one area, the entire region often gets painted with the same brush.

“Our biggest challenge is to geographically educate people,” he said. “We have a constant struggle and constant opportunity to educate the public.”