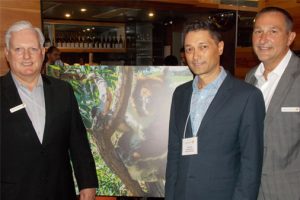 A little wine … and a whole bunch of news was on the agenda when Tourism Australia and its partners hosted a high profile travel trade crowd at the Chef’s House at George Brown College in downtown Toronto last night.

Naturally, any gathering hosted by the destination features Australian wine and the Sept. 21 event was no exception as the crowd had a chance to taste some special vintages.

As for tourism news, these are good days for Tourism Australia, with Robert Keddy, head of commercial partnerships, the Americas, telling the crowd that 2017 was a record year for the destination, with Canada turning in a stellar performance.

Canadian numbers were up by 14.7% to 163,900 visitors as of June 2017 (which is Tourism Australia’s year end) and leisure traffic – up 15.2% – was clearly a major driver of those gains as was additional lift from Air Canada, Air New Zealand and Qantas.

Keddy also noted that the Aussie Specialist Program (ASP) – which was re-launched in Canada about 18 months ago – has grown by leaps and bounds, with Qualified ASP agents increasing by 48% during that time.

For more, go to https://www.aussiespecialist.com/en-ca.html .

In the photo, from l to r, are Paul Larcher of VoX International, Ernst Flach, regional director, the Americas for the South Australian Tourism Commission and Robert Keddy, head of commercial partnerships, the Americas.