Things Looking Up For ALTA 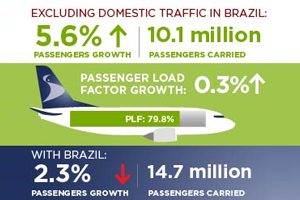 The Latin American and Caribbean Air Transport Association (ALTA) reports that its member airlines carried 10.1 million passengers in May, up 5.6% from the previous year and excluding domestic traffic in Brazil.

ALTA member airlines – including Brazil domestic traffic – carried 14.7 million passengers in May, down 2.3% — or 348,000 fewer passengers – from the previous year.