Tianguis The Toast Of Guadalajara 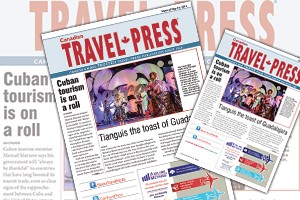 Site rotation for the host cities of the annual Tianguis Turistico Mexico travel trade mart brought delegates to the city of Guadalajara in the state of Jalisco this year.

Many had likely visited Jalisco in the past, possibly without even knowing it, as the state covers that part of the Pacific coast where scenic Puerto Vallarta is located, reports Ted Davis in this week’s digital edition of Canadian Travel Press.

Buyers from around the world descended on the second biggest city in the country to meet exhibitors who had stationed themselves in the spacious Expo Guadalajara conference centre, which boasts 90,000 sq. m. of exhibition space.

A highlight of this 41st edition of Tianguis Turístico was the “Gastronomic Pavilion,” dedicated to the promotion of Mexico’s gastronomy, with the participation of local chefs.

Attending Tianguis this year were about 2,420 buyers, who met with 3,100 exhibitors, and conducted over 32,000 business appointments.

The international audience of product buyers was sourced from 79 countries around the world, with a special emphasis on nations from Latin America. Among them were tour operators from the Pacific Alliance member countries of Colombia, Chile and Peru, plus Mexico.

Also, the number of countries from Asia represented – 52 – was a record for the trade mart.

It was a typically short and busy stay for most buyers, but still long enough for them learn that the city and the state have extensive histories of tradition and culture.

They experienced some of that through special events like an outdoor opening night party, which featured horseback riding demos, roping and dancing by vaqueros (cowboys), art displays, music by mariachi bands, food stations and lots of tequila-fueled concoctions.

Guadalajara is a key birthplace of tequila, and the drink is a featured libation in the city and the state. This is especially the case in the town of Tequila itself, about 60 km. from Guadalajara.

Visitors there are treated to an attractive town with plenty of dining and tequila tasting options. Tequila’s history has earned it a designation as a UNESCO World Heritage site, and it has also been named a Pueblo Magico (Magical Town) by the Mexican government.