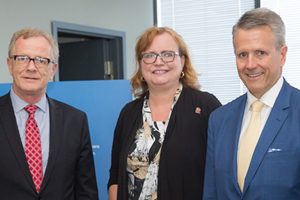 TICO hosted its annual general meeting in Mississauga, Ontario recently, where its board of directors named Richard Vanderlubbe as its new vice-chair.

Vanderlubbe is the president and co-founder of tripcentral.ca which has 27 locations in Ontario.

The vice chair appointment is for one year until TICO’s next Annual General Meeting to be held in 2018.

As well, TICO’s board of directors welcomed Marc Patry, director of CNH Tours in Ottawa, Ontario to the Board.

Patry was the successful candidate elected by the industry at large to serve a three year term on the TICO board. The position was open to a retail registrant.

TICO’s board also welcomed Jim Diebel, president of Hanover Holidays in Hanover, Ontario to the Board as the OMCA representative.

Richard Smart, TICO president and CEO, said: “On behalf of TICO’s Board of Directors we wish to welcome and congratulate Marc Patry and Jim Diebel on their appointment to the Board. The Board also extends its sincere appreciation to Paul Samuel and Ray DeNure for their contributions to TICO.

In the photo
Seen at TICO’s AGM (from left to right) are Jean Hébert, Chair, Minister MacCharles and Richard Smart.