Home › News › The Ties That Bind Between Canada and Ireland

The Ties That Bind Between Canada and Ireland 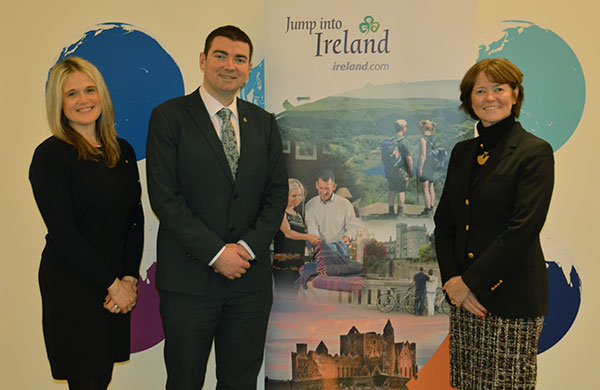 With increased connectivity from Canada — including 8,000 weekly seats to Ireland at peak summer season, one in five Canadians claiming Irish heritage and another record year for arrivals from Canada (over 200,000) in the books, Ireland’s Minister of State for Tourism and Sport, Brendan Griffin, is hoping the strong ties between Canada and Ireland will translate into further tourism growth.

In Toronto yesterday (Feb. 22) as part of a four-city sales blitz with Tourism Ireland and 13 tourism partners, Griffin’s visit to Canada is two-fold. Also on the agenda earlier this week was moving forward in a joint UNESCO World Heritage bid between Ireland and Canada to recognize the transatlantic cable between Valentia Island in Ireland and Heart’s Content in Newfoundland, which connected Europe and North America for the first time in terms of instant communication.

“This was a hugely significant communications development in 1866, basically before that if you wanted to send a message between Europe and North America, you had to send it by boat, this was allowing messaging to happen instantaneously,” he told PressToday. “Queen Victoria sent the first message actually from London to New York. This is something that’s recognized as the beginning of globalization in terms of instant communications.”

Some of the major news conveyed over the cable included the outbreak of the First World War and the sinking of the Titanic.

2017 was another record year for Canadian arrivals to Ireland, with an additional 27,000 Canadians over 2016, representing a growth of 12%.

“We’ve broken our records now for seven years in a row, and the Canadian figures have really grown strongly,” he says. “In a relatively short period of time we’ve gone from 2% of the outbound market to 4.2% of Canadian outbound.”

While lift access has continued to improve with the addition of a second gateway in Ireland from Canada, which many local operators requested during a Tourism Ireland event with the Taoiseach last year, during a luncheon with the minister yesterday, many operators expressed the need for more accommodations across the destination.

Meanwhile Ian Duffy, president of Royal Irish Tours, said another challenge is getting Canadians to think of Ireland in the winter, when they’re focused on heading south.

“Sun destinations can’t compete with the ancestry connection,” said Griffin. “We have so many links, it’s important to build on those, keep those strong.”

“As an island nation, of course, you depend heavily on air access,” he says. “We’re developing loads of new experiences and investing in the Irish tourism product heavily through capital investment.”

Stay tuned for more in an upcoming issue of Canadian Travel Press.