Tracking The Trends With Peregrine 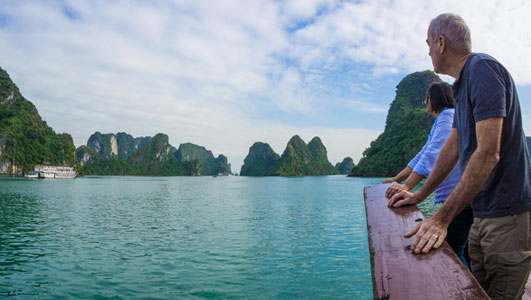 Now in its 40th year, Peregrine Adventures – which is part of The Intrepid Group – is reporting that it has seen a 51% increase in North American bookings since 2016, with the highest growth at 65% from North Americans over 60 years old, indicating baby boomers are influencing a surge in the adventure travel sector.

And according to research from a OnePoll survey commissioned by The Intrepid Group in January 2018, the North American baby boomer generation continues to seek adventure through travelling, with 55% stating their travel habits have not changed, and 22% stating they travel more than they did five years ago.

Leigh Barnes, director of North America for The Intrepid Group and Peregrine Adventures, noted that: “Baby boomers are an extremely influential generation; the 78 million-person age group has shaped politics, the economy and now, we are finding, the adventure travel sector.”

Barnes continued: “As the first of the baby boomers turned 70 last year, we’ve noticed they have both the assets and the time to travel the world, while also having a bucket list they want to tackle in a time when travel has never been more accessible to them.”

The same OnePoll research study found that baby boomers are searching for adventure in 2018 for three reasons: because they want to try new things (44%), they want to see the world (37%), and they love to experience new destinations (52%).

She observed that: “It has become evident to us that adventure travel is shifting and the definition of it is different for everyone. It can be as extreme as travelling to the least-accessible continent in the world, Antarctica, or as laid-back as eating your way through Italy on a food-themed trip.”

And she added that: “To many, adventure travel is about having experiences that have a real impact on a traveller and changes the way they see the world. Peregrine Adventures growth is a great reminder that impactful travel experiences and adventure are not just for younger generations, but equally as important to all age groups.”

Peregrine Adventures offers premium small-group adventure travel experiences in over 80 countries. The tours offer longer experiences like a 39-day safari in Southern Africa or shorter experiences like the eight-day Spirit of Amalfi trip, exploring Italy’s famous coast – all including the adventure baby boomers are craving, with a relaxed pace and 4-star accommodation for a comfortable trip.

And in direct response to the growth, Peregrine has launched a large range of new trips for 2018, including: traveling to Morocco for the World Sacred Music Festival in Fes; trekking Everest Base Camp on the nine-day Everest in Style tour; and cruising the Atlantic and Mediterranean on a small ship adventure cruise through Portugal, Spain and Morocco.

Go to www.peregrineadventures.com for more.