Trafalgar Once Again Teams Up With Author Schultz 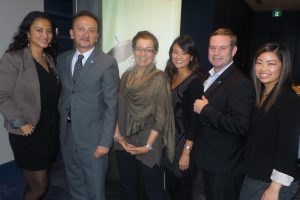 The woman who penned New York Times bestseller “1,000 Places To See Before You Die” says her travel well is far from running dry.

In fact, says Patricia Schultz, this great wide world of ours holds many more places she gladly set foot in.

Schultz, who estimates she’s seen 80% of the far-flung places she sings the praises of in her book, says the number of locales she’s touting has easily topped 1,000, thanks to her merging some parts of the world that weren’t initially mentioned in her travel guide with other areas.

And, continues Schultz – in Toronto yesterday (Nov. 7) for a Trafalgar Tours event, a company she works with – planet Earth offers a seemingly endless number of places to visit. Next on her must-see list are Saudi Arabia, Easter Island and Laos, three markedly different destinations.

“The more you travel, the more you keep stumbling on them [places of interest,” she told PressToday.

Schultz once wrote travel guides for the likes of Frommer’s and then decided to write a guide listing particularly memorable parts of the world she visited, first planning to call it 100 Parts of the World to See Before You Die. [Her publisher “wanted to add another zero,” she reports.] Among places that wowed her were Prague (“one of the most beautiful cities on the planet” and which she saw on a Trafalgar Easter Europe tour); Budapest (“beautiful in the evening time”); and Iran, which has dazzling archeological sites and a remarkably friendly people (“I thought I was in another universe.”)

Wolf Paunic, who oversees Trafalgar’s Canadian program, said that the tour operator will mark its 70th anniversary next year and is constantly working to “revitalize and improve our programs.”

Trafalgar is also expanding the number of countries it sends people to, he added.

Trafalgar also gives back to the communities it visits, Paunic continued.

Schultz said she welcomes Trafalgar’s broadening program, saying the world is home to an endless number of places of interest.