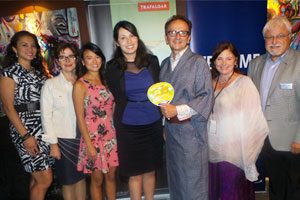 Trafalgar says vacationers can look over and well beyond such European landmarks as the Eiffel Tower and consider some far-flung parts of the world for their a holiday with that tour operator.
Wolf Paunic, who oversees Trafalgar’s Canadian operation, told a Sept. 14 Toronto gathering that Trafalgar – which he said was once viewed as “Eurocentric” – now sends clients to every continent except Antarctica.
Trafalgar has added nine more Asian itineraries to its lineup, with Paunic noting the company has decided to offer India, Sri Lanka and Laos to itslineup.
Paunic said the tour operator wants travel agents to realize that it has “fantastic alternatives” for those who decide against a European vacation, with the company having some 230 guided tours worldwide.
“Tonight we are not Eurocentric,” Paunic said. “Tonight we are global.”
Asia and Latin America are two parts of the world Trafalgar has been building a presence in, with Trafalgar able to send clients to either of those locales in a “traditional and experiential Trafalgar way.”
One aspect of Trafalgar’s program is Be My Guest, which Paunic said enables Trafalgar clients to meet people who don’t work in tourism in the lands they are touring.
Those visiting Vietnam, for instance can try the likes of traditional Vietnamese weaving in a village co-operative.
Paunic also praised Trafalgar’s altruistic side, noting clients can help make the world a better place during their vacations, citing the likes of spending part of a Thailand tour doing volunteer work at a sanctuary for abandoned or abused elephants.
“We have plenty of exotic experiences,” he continued. “Travelling with Trafalgar doesn’t mean you’re part of a certain demographic. It means you’re a curious traveller who likes to experience the local scene, see the local culture and meet the locals.”
Seen here are Marie Anne MacRae of TravCorp (Trafalgar); Shubert; Katherine Chin, TravCorp; Susana Moreno, Mexico Tourism Board; Paunic; Anita Emilio, TravCorp; and Jim Papas, Delta Air Lines.
http://www.trafalgar.com