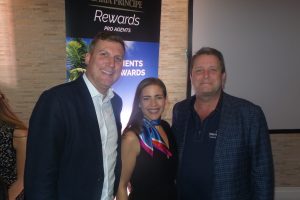 Transat and Bahia Principe Hotels & Resorts seemingly have a match made in heaven.

The tour operator and the lodging company held a March 8 Toronto event touting Bahia Principe’s Rewards Pro Agents program that saw both companies lavishing praise on each other.

Michael Price, who oversees Bahia Principe’s Canadian division, told the Toronto gathering that Bahia Principe has an “amazing partnership” with the tour company.

Bursey was one of several Transat employees to praise Bahia Principe, with one of her colleagues declaring that Transat is “so privileged” to have one of the “best partners that anyone could work with” in the resort company.

Bahia Principe is reaching out to different types of travellers, among them wedding and golf groups, with the latter being catered in part to by the decision to add a second golf course in La Romana, Dominican Republic.

Bahia Principe Rewards offers agents who enroll a number of benefits, such as free stays in the Dominican Republic, Mexico and Jamaica; treatments at spas; transportation and excursion vouchers; and special travel rates and discounts at all Bahia Principe properties.

Pictured are Transat’s Dan Prior and Tabatha Bradley, and Price.