Home › Airlines › Transat Gets The Message Out

Transat Gets The Message Out 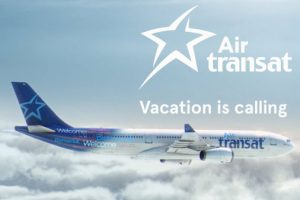 Air Transat has launched its latest advertising campaign, building on a concept introduced last year with the signature “Vacation is Calling.”

The campaign includes activations on the Web and social media, as well as on TV, radio, on out-of-home display advertising and in print media.

The anticipation and excitement of vacationing remains at the heart of the campaign, this time emphasizing the enjoyment of Transat employees sharing their new and favourite finds with travellers.

“Through this new campaign developed with Sid Lee, Air Transat is more than ever living up to its brand promise, which is to brighten the everyday with the joy of vacations,” says Geneviève LeBrun, vice-president, marketing, Transat Tours Canada. “This passion for travel and tourism is part of Transat employees’ DNA, and finds expression every day in a multitude of ways – and that’s why we wanted to highlight it in the campaign.”

One of the new campaign videos is available for viewing on YouTube at http://bit.ly/2wSa4iX.