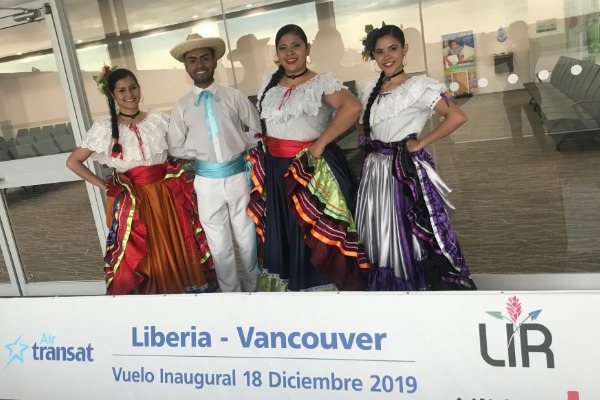 Air Transat inaugurated service between Vancouver and Costa Rica Wednesday (Dec. 18), consisting of a direct flight to San José and a second flight segment to Liberia.

The route is available twice weekly, on Wednesdays and Saturdays, until April 18.

“We are proud to be adding these new destinations to our winter 2019-2020 program and in the process enhancing service out of Vancouver,” says Jean-François Lemay, president, general manager of Air Transat. “These new routes make it easier than ever for travellers to explore Costa Rica, an increasingly popular tourist destination that has so much to offer in the way of rich culture and majestic scenery.”

To mark the occasion, the team at Vancouver International Airport served up beverages and sweet treats to passengers before they boarded Air Transat’s first-ever flight TS796.

After its initial stop in San José, the aircraft landed at Daniel-Oduber-Quirós International Airport in Liberia to a traditional water cannon salute. Disembarking passengers watched a ribbon-cutting celebration and enjoyed snacks in the company of César Jaramillo, CEO of the airport.