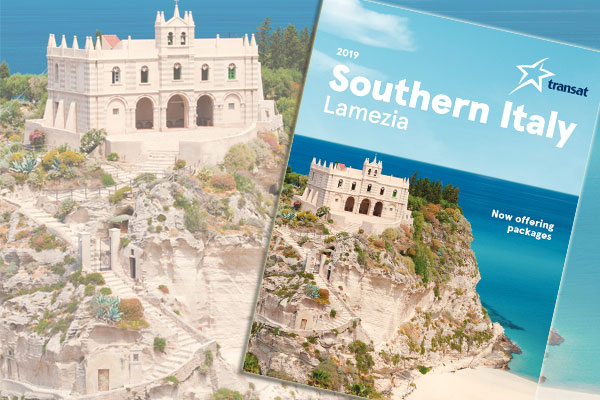 Air Transat is inviting travellers to discover the many charms of Southern Italy with two direct flights to Lamezia from Toronto.

This destination is also available from Montreal, Vancouver and Calgary via Toronto. Of course, Rome and Venice, both accessible via direct flights from Montreal and Toronto, need no introduction. But for a taste of something new, Transat says the south of the country, with its cornucopia of activities and lush landscapes, is just waiting to be discovered.

Located in the heart of Calabria, Lamezia is the perfect gateway to all the splendour found in the south. The region’s capital, Catanzaro, is 30 minutes away by car. Two hours south of Lamezia lies the largest Mediterranean island, Sicily. And to the north, the regions of Basilicata and Apulia are easy to get to as well.

Transat offers the Charms of Calabria multi-city package, which lasts nine days and seven nights. Travellers can add their choice of six à la carte visits, including the Aeolian Islands and Taormina in Sicily.

Bordered by the Ionian Sea to the east and Tyrrhenian Sea to the west, Calabria boasts nearly 800 km of shoreline with turquoise waters, towering cliffs and idyllic beaches. It’s often described as the “land between two seas.” While the Tyrrhenian is lined with majestic cliffs and wild, white-sand beaches, the Ionian coast presents calmer, equally inviting waters. From Lamezia, the various villages perched by the Tyrrhenian Sea between the towns of Capo Vaticano and Tropea are gems waiting to be discovered.

Calabria is home to Sila and Aspromonte, two mountain national parks with trails where outdoor enthusiasts can admire local flora amid breathtaking landscapes.

Italy and fine gastronomy go hand in hand and Transat notes that Calabria has no shortage of local specialties, including its signature tartufo di Pizzo; Nduja; Cedro; Peperoncino di Spilinga; and Olive oil.

In addition to the Ionian and Tyrrhenian seas, Sicily dips into the Mediterranean, making the island ideal for aquatic sports, including scuba diving, windsurfing and kitesurfing.