Home › Destinations › Travellers Invited to Get Wild in South Africa

Travellers Invited to Get Wild in South Africa 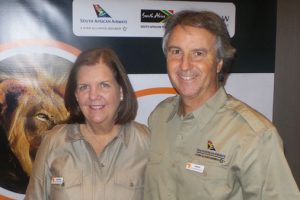 South African tourism authorities are inviting those interested in the animal kingdom to see the king of the beasts and other creatures roaming freely on their own turf.

Virginia Dionisio of South African Tourism told a Monday Toronto gathering that the destination she promotes offers plenty of opportunities to see lions and other wildlife.

Speaking during the Toronto visit of Africa Showcase North America, which is promoting numerous African countries in several North American cities, Dionisio said Kruger National Park is particularly well known among nature enthusiasts, but noted it’s only one of many parks throughout the country.

Dionisio added that the country’s private reserves in turn have a “limited number of vehicles in them, which gives you a bit of exclusivity.”

Dionisio added that visitors are surprised by the “diversity of experiences South Africa has to offer,” with the likes of wine tours, seasonal whale-watching and adventure – including great white shark cage dives – among available choices.

“The game-viewing is the best in the world,” he said of region that offers safaris that can provide sightings of lions, elephants, rhinos and a host of other creatures.

Chorley said his carrier has a “very good working relationship with Air Canada,” code-sharing with it.

South African Airways’ network features dozens of countries and the carrier is particularly prominent in southern Africa, he noted. Among its destinations are New York, Washington, London, Frankfurt and Munich.

Pictured are Dionisio and Chorley.