As Insight's Director Readies To Step Down From The Position, CTP Looks Back On His Impressive Career 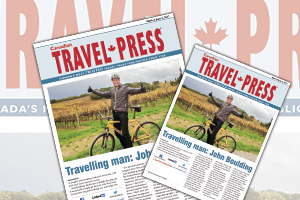 John Boulding, the director of Insight Vacations, actually got his start with The Travel Corporation long before taking on a leadership role, reports assistant editor, Ann Ruppenstein in this week’s digital edition of Canadian Travel Press.

“I’ve been back with the company since 1997, so 20 years heading up Insight, but I come from an earlier time to that. I started with Contiki in 1979 as a tour director – that’s how I started in the business,” he told Canadian Travel Press.

“Then I went into operations management with Contiki and moved to Insight in 1985, and then left in ’92 to go to a big German operator as managing director – that was my first managing director role – and then had my own business, which I sold and came back in 1997. So a long time! A long time in the business.”

While Boulding has announced impending plans to step down from Insight later this year, making way for new CEO Ulla Hefel Böhler, he’s currently aligned with the premium and luxury tour operator’s target demographic – and says the best part of his role is being involved in every aspect of running the business.

“Our core customer, 67% of our guests are baby boomers, 19% are older, then we have younger people too, but that means I’m right in the main segment myself and so I really get what the product is about,” he says.

“I really get what the guests’ aspirations are and that’s exciting. I’m involved right across the business – I can help shape and change things and develop the program and I really get it. I really do understand what our customers are looking for so that’s what I do.”

On the road for roughly six months out of the year, his travels are typically spread across the sales season from August to early March, which consists of launching Insight Vacations & Luxury Gold programs to internal teams and then promoting the itineraries around the world, and the operational season when trips tend to be more short-haul, as well as on dropping in on tours that are underway around the globe.

“It’s a challenging role because it’s been tough times. The last couple of years have not been easy. There have been a lot of misconceptions around travel and people have worried sometimes about going to Europe because of things they’ve seen in the press or in the news,” he says.

“We’ve had to work very hard to explain the misconceptions that people have had – that you can actually go and have a great time.”

Despite those setbacks to travel, he says sales are currently booming.