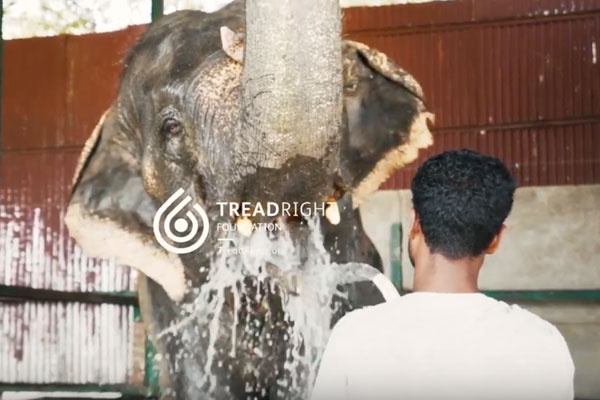 The TreadRight Foundation has unveiled its newest video highlighting one of the organization’s Wildlife projects in India, Wildlife SOS.

Hosted by TreadRight Ambassador Céline Cousteau, the TreadRight-led experience brought together a group of storytellers on a journey of education and compassion in India. The central goal of their trip was to learn more about Wildlife SOS’s work to save elephants from negligent and abusive situations and bring more attention to the organization’s influential #RefuseToRide campaign.

Most travellers have no idea of the abuse that elephants must endure to be “tamed” for riding. They’re poached from the wild as babies, isolated from other elephants, then beaten until they’re so terrified of people they’ll do anything. This cruel practice is called phajaan, or “breaking of the spirit.” After the elephants are deemed “tame” enough to do what people tell them, these elephants can look forward to decades of difficult, tedious labour with little to no access to good food, fresh water, quality veterinary care, or even the company of other elephants. Wildlife SOS is working to put an end to this abusive industry.

“It might be your dream to ride elephants, but this is an elephant’s worst nightmare,” says Kartick Satyanarayan, co-founder & CEO of Wildlife SOS. “Riding an elephant may seem innocuous considering the large size of the animal, but the reality is quite different, and extremely shocking. Coupled with the fact that these elephants are beaten mercilessly to make them ‘ride-able’ and ‘photo-friendly,’ the excruciating pain that elephants suffer through to carry people on their backs only adds to their misery.

“The never-ending demand from tourists for animal sports and entertainment is keeping this grotesque industry alive. If tourists stop riding elephants, elephant abuse and exploitation will automatically end. As long as there are huge profits to be made by exploiting these animals, the abuse and exploitation of the animals in the tourism and entertainment industry will persist,” adds Satyanarayan.

Much of what takes place in the elephant-riding industry is illegal by Indian law and, as such, Wildlife SOS is petitioning governmental authorities to do all they can to help put an end to the abuse of elephants used for riding in Jaipur, India.

“Elephants are extraordinary animals and it’s natural to want to experience them up close,” explains Shannon Guihan, program director, The TreadRight Foundation. “However, responsible travellers will look more closely and begin to understand the decades of pain, suffering, and cruelty that goes into producing that one-off tourist experience and recognize the need to refuse to ride. We’re honoured to help Wildlife SOS spread this message.”