A Little Incentive For TTAND Agents 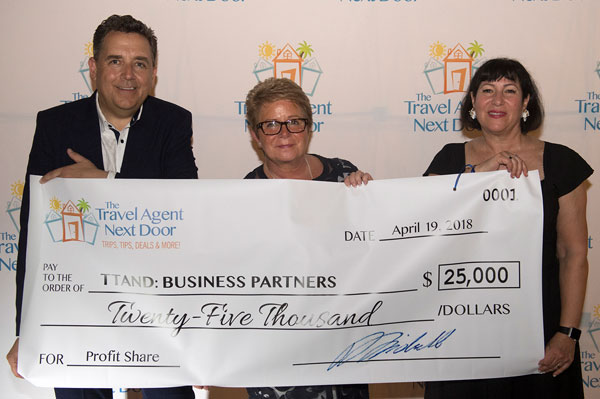 Travel agent members of The Travel Agent Next Door group ended their annual conference on a high note, when they learned that a new partner incentive program would be boosting some bank accounts.

The new profit-based program was introduced on the final night gala of the annual gathering, held this year at the Majestic Colonial Resort in Punta Cana. TTAND founder Flemming Friisdahl joined key executives on stage at the gala to unveil a $25,000 cheque. That is the total amount that was divided amongst those agents who surpassed a certain sales threshold.

Specifically, the profit sharing incentive was offered to agents whose sale of preferred and approved suppliers was 70%-plus of their total sales. TTAND did not specify the number of agents who were awarded the extra amount, but did say that about 65% of the agent roster qualified to receive the profit split.

Its the first program like this for travel agents that Im aware of, said Friisdahl, who was present in Punta Cana to oversee the operation of the TTAND conference. It ran from April 13 to April 20, giving some 140 agents time to take in a comprehensive schedule of work meetings, as well as also enjoying the resort and beachfront.

The key motivation for providing the award is to give the agents extra benefits for doing well in their businesses, said Friisdahl. Its meant as a sign of appreciation for a job well done. He noted that it also really helps increase the focus on the preferred suppliers.

Friisdahl said that the average proportion of preferred and approved suppliers in total sales by member agents was 78%. As such, maintaining a proportion of 70% or more is a very achievable goal he said  one that encourages participation in the retailing of preferred and approved suppliers. The founder said the partner incentive program would continue as long as TTAND remained profitable.

The Travel Agent Next Door founder Flemming Friisdahl (l.) is joined by Rhonda Stanley, TTAND VP of new talent development (c.) and Penny Martin, TTAND VP of agent experience (r.) during the introduction of a new partner incentive program. The program debuted at the TTAND annual conference in Punta Cana this year.