Home › Destinations › TTAND Agents Lend A Hand In The D.R.

TTAND Agents Lend A Hand In The D.R. 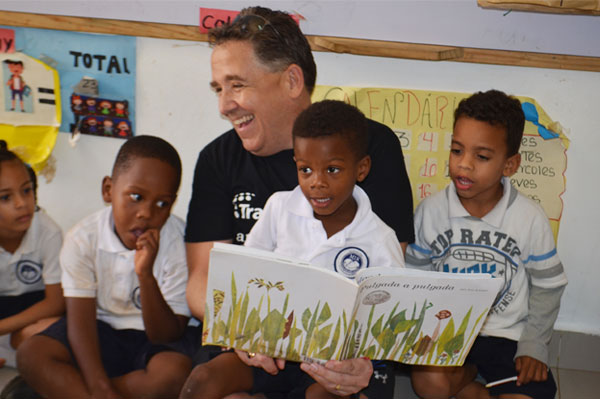 Conference business took a more altruistic turn in Punta Cana this week, as members of The Travel Agent Next Door collective pooled their resources and physical work skills to lend a hand at two public schools in the Dominican Republic.

About 140 TTAND member agents came to the Majestic Colonial resort on the Caribbean coast to attend the group’s fourth annual educational conference, dubbed “On A Mission,” reports Press Today’s Ted Davis, who is attending the event.

Hundreds of elementary students at one school, and secondary students at a second one, turned out to meet about 80 of those agents who rode coaches from their resort on the beach into the countryside of the D.R.

Those agents enacted the “On A Mission” agenda by bringing all manner of school academic and sports supplies as donations for the schools – one agent from Alberta came fully laden with 17 boxes of goods.

With the help Transat providing free transportation, Stacey Knight of Compass Vacations assembled boxes full of uninflated soccer balls, sports T-shirts, whistles and even award medals with the help of a soccer association in her area.

Some TTAND agents also brought their willingness to work on various repair projects around the schools, including those that took place under the Caribbean sun.

With brushes in hand, one group of agents painted picnic benches and tables, while others painted the surface and boundary lines of a basketball court. Support for the school charity efforts in the D.R. was also provided by TravelBrands and AMResorts.

TTAND’s philanthropic efforts have extended across the Atlantic to Africa, where their donations are supporting a group named Pencils For Kids.

Founding member Robin Mednick was on hand at the TTAND conference to outline the goals and accomplishments of the program, which has raised donations for the building of schools and the start-up of farming education courses in poverty-stricken Niger.

The funding has has helped build three schools, a library and kindergarten, plus finance the training of three horticultural technicians. About 100 women in five villages are being instructed on sustainable farming methods by the technicians, as part of the “Farmers of the Future” program.

The Travel Agent Next Door founder Flemming Friisdahl meets elementary students at the MIR school in the Dominican Republic during the fourth annual TTAND conference in Punta Cana.