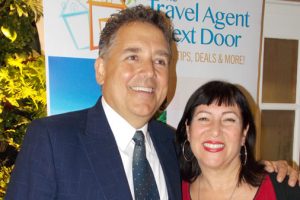 The Travel Agent Next Door (TTAND) hosted its third annual open house in Toronto this week and it was a packed house. In fact, so many people wanted to attend that TTAND founder, Flemming Friisdahl decided the best thing to do was move the event across the street to The Strathcona Hotel.

And that’s kind of indicative of how things have gone for the home-based agency group which launched its operations three years and seven months ago and has grown to 488 agents and 26 staff and in all likelihood will generate somewhere in the neighbourhood of $80 million to $82 million in sales by the end of 2017.

And Friisdahl had high praise for TTAND’s suppliers, thanking them for the support and observing: “They stepped up for us from the beginning.”

TTAND’s founder, along with the group’s vice-president, Penny Martin, unveiled a number of new initiatives the group is rolling out that include its Learning Library, lead generation program, a new extranet and a remarkable new database.

So stay tuned, there’s bound to be more …

In the photo, from l to r, are Flemming Friisdahl and Penny Martin.