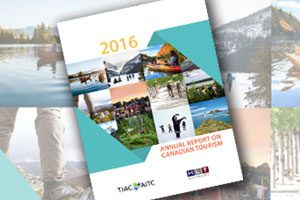 The Tourism Industry Association of Canada (TIAC) and HLT Advisory (HLT) have released the 2016 Annual Report on Canadian Tourism.

The report focuses on the potential opportunity to target American travellers and reviews the parameters powering global industry growth in contrast to the perennial factors constraining Canadian performance.

Insights from this year’s report include:

TIAC president and CEO, Charlotte Bell said: “As 2016 comes to a close, tourism boasts the highest overseas results ever for the summer season and strong returns on targeted US market campaigns.The industry welcomes these successes with caution as increased volume does not compensate for lagging market share and policies undermining Canada’s global competitiveness.”

Bell added: “Given the momentum and the growth goals outlined for 2022, tourism’s path to success hangs on federal government measures addressing the burden of fees, taxes and levies, air travel and consistent marketing funding to secure the industry’s role as a job creator and key contributor to Canada’s economy.”

Lyle Hall, managing director of HLT Advisory, noted: “Since 2012, Canadian tourism has undergone significant change, as have the political, economic and regulatory parameters within which Canadian and international tourism operate.”

And the report also notes that with Canada’s 150th birthday fast approaching, 2017 may spark widespread industry celebration, however, the challenges and opportunities identified throughout this 2016 report need to be addressed in a timely manner to build on our recent successes.